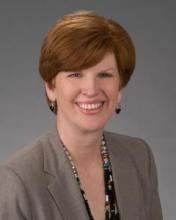 Professionally, Ms. MacNamara is an attorney, recently retired as deputy chief assistant district attorney in charge of the office’s juvenile court division in DeKalb County. Prior to this promotion, she had served as assistant district attorney since 1986. Her interest in juvenile justice arose after years of volunteering for the public high school activities of her two sons, including mock trial, academic bowl, track, marching band and cross country. She has also served as a staff attorney for the National Center for State Courts and law clerk for the Superior Court of DeKalb County.

In addition to her decades-long volunteer service with the League, Ms. MacNamara has volunteered with the High School Mock Trial Program; the Band Parents Association of Lakeside High School; University of Georgia Parents and Families; and PTA.

Ms. MacNamara graduated from Emory University with a B.A. in 1976 and a J.D. in 1979. She is a proud member of Phi Beta Kappa, Omicron Delta Kappa and Pi Delta Epsilon, and has lived in DeKalb County, Georgia, a suburb of Atlanta, since 1974.

In honor of our 96th anniversary as well as Presidents’ Day, we are calling upon our supporters to help us in Making Democracy Work and bringing new voters into our electoral process this year.

Thank You for Making #GivingTuesday a Huge Success (Blog)

With your help, we met the goal of our Giving Tuesday Matching Gift—doubling your generosity. This support couldn’t come at a more important time. We have pledged to make 2016 a record-breaking year for voter registration, education and mobilization.

On Tuesday, we brought together supporters, policymakers and members of the media to introduce Dr. Wylecia Wiggs Harris as our newest executive director and to bid a fond farewell to our previous executive director, Nancy Tate who led the League for 15 years.

Test your knowledge about the presidential nominating process by taking our quiz!

Yesterday, millions of voters across the country took control in their communities by casting their votes in thousands of state and local elections. If you voted this year or helped others in your community cast their votes, thank you!

We've been lobbying to make sure the healthcare exchanges required by the ACA comply with the National Voter Registration Act. This week, we asked the president for voluntary compliance.

In a time of great cynicism about politics and apathy among voters, Suffragette serves as a good reminder to look back and remember what life was like for those once excluded from the political process.

For the fourth straight year, organizations across the country are celebrating National Voter Registration Day by registering thousands of new voters. Join us in helping register voters!

Tell the EPA’s administrator, Gina McCarthy, you support the regulation to mitigate climate change and protect the air we breathe by cutting methane emissions.