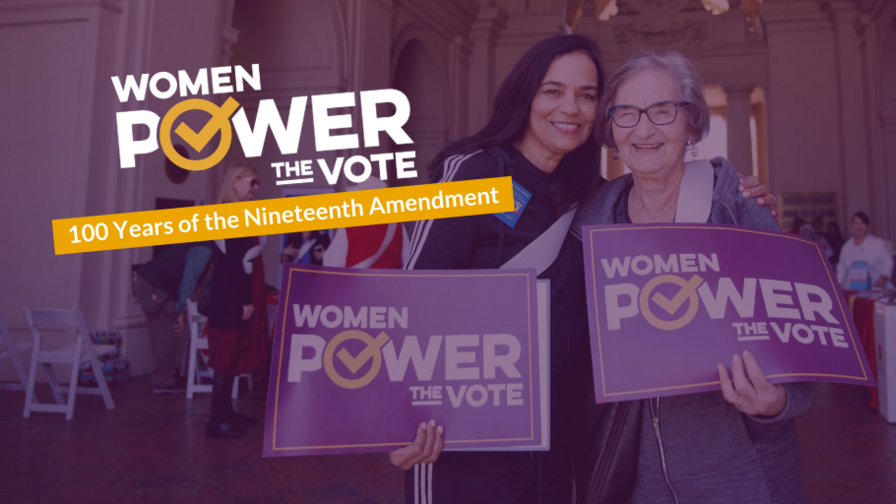 -The 19th Amendment to the United States Constitution

On this day in 1920, the 19th Amendment was ratified, bringing a long and hard-fought campaign to allow women the right to vote to a successful conclusion. It was the largest enfranchisement of voters in our nation’s history, and while its shortcomings today are seen in sharp contrast, we commemorate this day and the foundation it has built for our modern democracy, where women not only cast ballots but see their names on the top of them.

This milestone comes at a defining moment in American history. While the League never endorses candidates, it is difficult not to pause to absorb the moment at hand: This week, a woman of color will be named to a presidential ticket for the first time in our country’s history. That’s 244 years after the ink dried on the Declaration of Independence, 157 years after President Lincoln issued the Emancipation Proclamation, and 55 years after Rosa Parks said, “I’ll sit here, thank you.”

If there is a theme here, it’s that progress to date has been woefully slow. But today, we embrace the opportunity to put it into a new gear—not for the sake of speed, but to live up to the ideals of our democracy and show the world what it means to us.

Having a woman of color finally appear on the presidential ballot will leave its mark on generations of young women. It also has the potential to help women who aren’t of color to look more deeply and differently at these individuals, who have for so long been overlooked, denied, taken for granted, or downplayed.

Today and every day after today, I challenge women of all backgrounds and experiences to find time to get to know those that came before them – or even those who live just down the block. In this pursuit, they may find women who have changed the world across generations, like Gertrude Rush, a black lawyer from Iowa who founded the NBA in 1925; Shirley Chisholm, who ran for president; Katherine Johnson, Dorothy Vaughan, and Mary Jackson, who helped put Americans into space; Althea Gibson, who not only played Wimbledon but won the single’s title in 1957 and many more who dared to show up in spaces where women, especially women of color, were not just made to feel uncomfortable but in some cases were made to feel unsafe.

There are many firsts ahead for people of color and women as we continue to dismantle systems of oppression. The League has long supported more women running for office at every level. We will keep working toward the day when seeing women elevated to the highest positions of power is the cultural norm. The ultimate goal of being the first is not to be the last!

This anniversary falling months before a presidential election cycle in the middle of a pandemic is further reason to ensure every voter can exercise this basic American right. Casting a ballot is more than a decision on representation; it is an homage to the women and men who have been locked out of the process.

We continue to see voter suppression 100 years later – not in the form of poll taxes or literacy tests, but with misinformation campaigns, discouraging rhetoric that casts doubt on our great democracy or questions our country’s election integrity. We must rise above this, continue our work, and motivate others to action. The League is fighting in the courts to protect voting access at the ballot box and the mailbox, and we have won voting rights victories that expand access in nine states so far. And we are countering the misinformation by making sure millions of voters can access our nonpartisan voter guides and confirm election information on our award-winning election website, VOTE411.org.

This year's election will be a ride that we’ve never experienced, so my closing message is this: Take care of yourselves. Stay safe, stay healthy, wear masks, and vote. Commemorate this milestone and honor the legacy of the women that came before us by making your voice heard this year.

TODAY SHOW: Women got the Right to Vote 100 Years Ago, but the Battle for Equality is not Over