5 Reasons to Have Confidence in Mail-in Voting 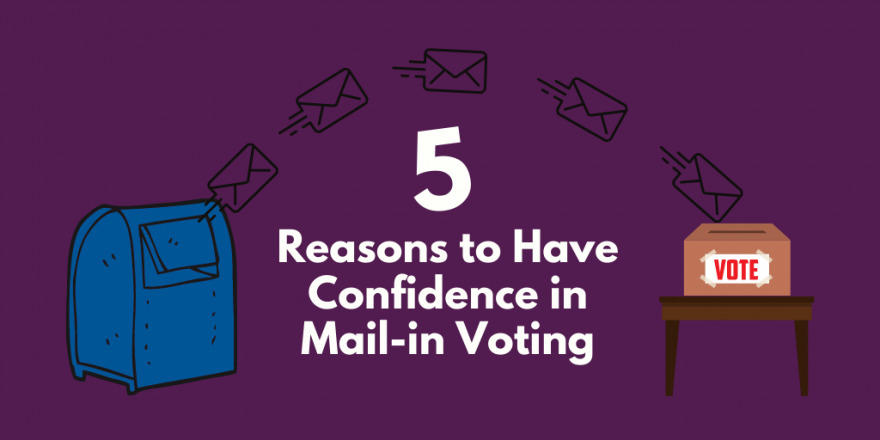 This guest post was contributed by Amber Stenger, co-president of the League of Women Voters of Johnson County, Kansas.

Voters can trust in the safety and security of the mail-in voting process, regardless of recent politicized claims to the contrary. Since 2000, more than 250 million votes have been cast via mailed-out ballots in all 50 states, according to the National Vote at Home Institute.

Here are five reasons you can vote by mail with confidence.

Absentee voting dates to the Civil War, when several states granted members of the military the opportunity to vote when they were “absent” from their home districts. Now, every state has some type of vote-by-mail process. In five states—Oregon, Washington, Hawaii, Utah, and Colorado—mail balloting is the primary method of voting. In 2018, a quarter of the electorate voted by mail.

2. It’s difficult to request a mail-in ballot or cast a vote by mail using someone else’s name.

It’s a misconception that because there’s no way of knowing who’s requesting or voting a ballot, it would be easy to apply for or vote a ballot by mail in someone else’s name. Every step of the vote-by-mail process includes security procedures to ensure the voter requesting the ballot is the voter receiving and voting the ballot.

The most common way to verify that mail ballots are coming from the intended voter is through signature verification. Voters must sign an affidavit on the ballot envelope. When the ballot is returned to the election office, election officials examine and verify every signature, comparing it with voter registration records or other documents that contain the voter’s signature.

Some states require copies of identification documents or that their envelopes are signed before witnesses or are notarized.

Mailed ballots typically are delivered to and picked up from the post office by two election office staff and transported in a secure container. These ballots are also processed by teams of trained election staff to ensure the integrity of the counting process.

4. Vote-by-mail programs do not favor one political party over another.

The researchers say their findings essentially dispel concerns that mail-in voting would cause a major electoral shift toward one party.

Based on a meticulous review of elections that were investigated for voter fraud, the Brennan Center for Justice found minuscule incident rates of ineligible individuals casting ballots at the polls – no more than 0.0025 percent. Numerous reports have confirmed this finding that voter impersonation is exceedingly rare. Research shows that voter fraud is similarly rare with mail ballots.

Blog
Knowing the Difference: Voting Absentee vs. By Mail

This year, more Americans than ever will be using these methods to vote in upcoming elections, and so it is important to understand the similarities and differences between the two.

LWV of PA filed a lawsuit challenging the state's practice of conducting signature match verification yet providing no notice or opportunity for voters to fix any issues before rejecting their ballots.