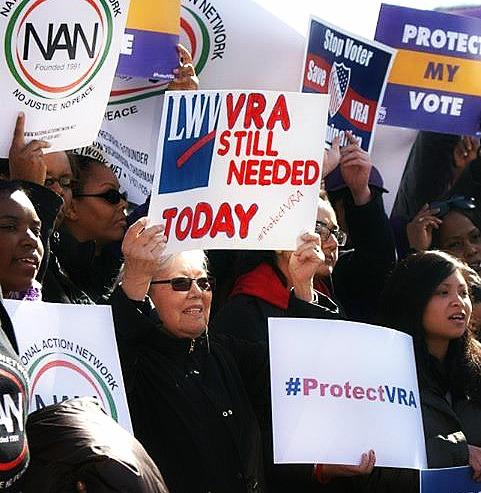 North Carolina’s law, deemed the most restrictive voting measure passed since the civil rights era, imposes a strict voter photo ID requirement, eliminates same-day registration, shortens the early voting period by a week, eliminates pre-registration for 16- and 17-year-olds and purges the voter rolls more often. In addition to thwarting these voter suppression efforts, the DOJ lawsuit also aims to force North Carolina to obtain federal preclearance, or approval, for any future changes made to its voting laws. For over 40 decades, preclearance has proven to be essential in stopping discrimination by halting implementation of discriminatory changes before voters go to the polls. Members of Congress from both sides of the aisle acknowledged the necessity of federal preclearance when the VRA was last authorized in 2006, at which time more than 15,000 pages of evidence attested to discriminatory election practices.

But the Supreme Court’s decision against the VRA this summer did away with federal preclearance, which had formerly covered 16 states, in part or in whole, including North Carolina and Texas. Before the ink was even dry on the Supreme Court’s decision, a number of states formerly under preclearance – including, Texas, Alabama, Virginia and Mississippi – moved forward with voter suppression efforts, contributing to the still-building all-out attack on voting rights happening across states. Luckily, voters in states across the country are fighting for their right to vote. When Governor Pat McCrory signed North Carolina’s voter photo ID measure into law this summer, the measure sparked both local and national outrage, helping strengthen the weekly mass protests – called Moral Mondays – that mobilized thousands of voting rights advocates and others. The League is leading the fight against these new measures in many states including Florida, Ohio, Pennsylvania, South Carolina, Texas, Virginia and Wisconsin.

The League applauds Attorney General Holder and the Justice Department for their lawsuit in North Carolina and their continuing work to support voting access for all eligible U.S. citizens. Speaking at the Congressional Black Caucus Foundation last month, U.S. Attorney General Holder vowed that DOJ would “not allow the [Supreme] Court's action to be interpreted as 'open season' for states to pursue measures that suppress voting rights.” We’re encouraged by this promise, and we call on the Department of Justice to use all means at its disposal to see that anti-voter legislation gets swept into the dustbin of history where it belongs. As we fight voter suppression efforts in the states, the League will continue to push for strong action by Congress to repair and restore the VRA protections that have successfully helped prevent discrimination in our elections for decades.