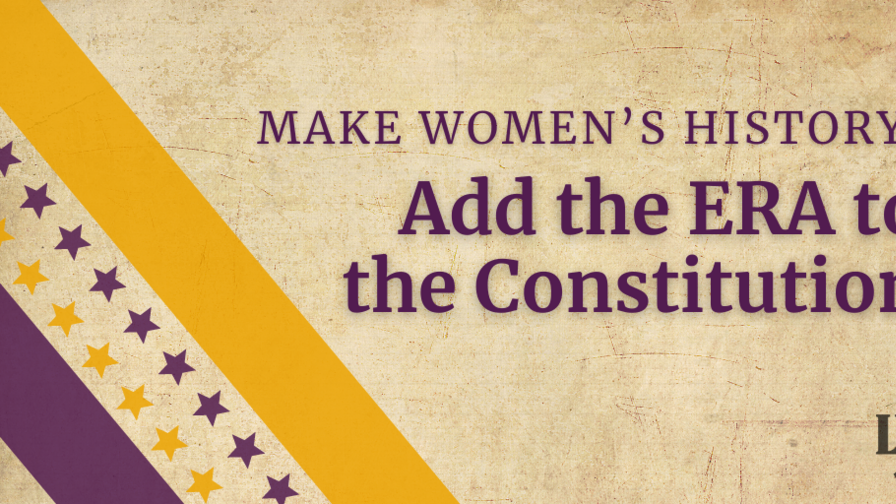 Make Women’s History: Add the ERA to the Constitution

It has been 101 years since the 19th Amendment granted women the right to vote.

It has been 98 years since the Equal Rights Amendment was first introduced in Congress.

It has been 49 years since the ERA was passed by Congress.

And it has been one year since the ERA was ratified by the required 38 states.

WHAT IS THE ERA?

Section 1. Equality of rights under the law shall not be denied or abridged by the United States or by any State on account of sex.

Sec. 2. The Congress shall have the power to enforce, by appropriate legislation, the provisions of this article.

Sec. 3. This amendment shall take effect two years after the date of ratification."

Despite Abigail Adams’s famous advice to her husband John Adams to “remember the ladies,” he and the rest of the founders left any mention of women out of the founding documents. As a result, the U.S. Constitution does not mention women at all.

The ERA was first drafted in 1921 by Alice Paul, suffrage leader and head of the National Women's Party. Paul didn’t believe that the 19th Amendment alone would provide equal treatment for women – and it did not. History has shown that the 19th amendment didn’t even guarantee voting rights for all women, leaving many women of color and those with limited financial status as targets of suppression and discrimination.

Paul and other suffragists feared the 19th Amendment alone would not be enough to ensure women were treated fairly, and so the ERA was conceptualized to guarantee inclusion and strengthen protections under the law.

By the time Congress passed the ERA in 1972, it had received support from leaders of both parties, multiple organizations, and persons of all walks of life. Eisenhower, Kennedy, and Nixon supported the ERA. Political powerhouses including Coretta Scott King, Alice Paul, and Shirley Chisholm lobbied to make women’s rights a major policy issue  in Congress. The grassroots movement for equal rights that some have labeled the second wave of feminism ignited the country, and, in a direct parallel to founder Carrie Chapman Catt’s “winning plan” for the 19th Amendment, the League of Women Voters took on a nationwide campaign to see the ERA ratified.

The opposition—primarily stoked by misinformation and fear of change—was fierce, however, and it wasn’t until one year ago that Virginia became the 38th and final state needed to ratify the amendment. Now it is time for Congress or the courts to eliminate the ambiguity of the arbitrary and legally questionable deadline imposed on the ERA at its passage.

EQUAL RIGHTS, ONCE AND FOR ALL

So why do we need the ERA?

It is important to recognize that inequality hurts everyone. The Equal Rights Amendment is not only for women, but for all Americans, regardless of gender identity or sex. It is a promise that our government will not pass laws or take any official action that discriminates against its people on the basis of sex. As long as this equality is not enshrined in our Constitution, there is the risk that laws can be passed to diminish the idea of equality in America.

We need the ERA because we need equal pay, fair healthcare coverage that addresses maternal mortality and coverage for caregivers, protection against gender testing laws, prevention of discrimination against LGBTQ+ persons, protections for men in occupations and roles traditionally held by women, and protection against rollbacks in women’s rights.

We need the ERA because, just as many women of color faced added barriers for voting until the Voting Rights Act, today women of color are more likely to be under-paid and discriminated against than white women. The ERA would make the Constitution prohibit discrimination on the basis of race AND sex.

But more than that, we need the ERA because our nation must close the book once and for all on the idea that equality of rights is a debatable issue.

Because a constitution is not only a set of legal protections: it is a proclamation of a nation’s values. It is time we enshrined our values in the Constitution.

The House passage of the Equality Act last week was a major step in the fight for equal human rights in this country, but a law is not the same as a constitutional amendment and is always vulnerable to reversal.

There is a critical reason our Constitution’s framers made the amendment process a difficult threshold to overcome:  the Constitution and its amendments are supreme and absolute. An amendment to the Constitution is superior to any law that is passed. It becomes a part of the bedrock of our democracy.

The ERA fulfills the promise that the Constitution originally proclaimed. It has stood up to rigorous social and legal scrutiny. It is the result of almost a century’s worth of work, decades of women who have done the heavy lifting.

This Women’s History Month, let’s make history by establishing gender equality in our Constitution, once and for all.

On January 27, 2020, Virginia became the 38th state to ratify the Equal Rights Amendment. Now that the amendment has passed the 38-state threshold for ratification, several questions have arisen about its path to final enshrinement.