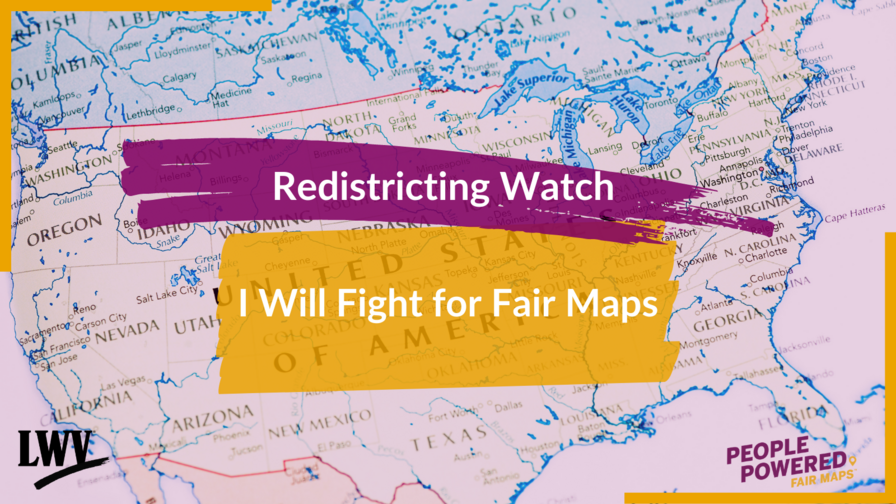 Redistricting Watch: I Will Fight for Fair Maps

Every ten years following the collection of the decennial census data, states redraw their legislative and congressional district lines which determine where people vote and who they can vote for.

Historically, politicians have manipulated the redistricting process in order to keep and expand their own political power—often to the detriment of the minority political party, communities of color, and in particular, Black communities. This manipulation is called gerrymandering and does not happen by accident. Gerrymandering happens most egregiously when those in power make decisions behind closed doors and the people whose interests they are supposed to be representing, are cut out of the process.

While the Voting Rights Act of 1965 was established to protect voters against voter suppression tactics like racial gerrymandering, we know that racial gerrymandering still happens—impacting not just who and where people can vote, but how and if communities’ interests are represented.

Partisan and racial gerrymandering are closely linked. For example, in 2016 the Republican majority redrew the North Carolina legislative districts after the US Supreme Court deemed the 2011 maps unlawful. When redrawing the maps, the largest historically Black college in the country, North Carolina A&T State University was split into two different districts. As student Love Caesar noted at the time, “This many students have the ability to sway any election. Dividing that in half, putting half this way, half the other in a majority-Republican district, that definitely dilutes the vote.” This is a gerrymander that targets the political power of a racial group for the benefit of the political party in power.

The League of Women Voters believes in a democracy that is powered by the people and is for the people, all the people. This is why we launched the People Powered Fair Maps program, an effort focused on organizing educational and engagement efforts to prepare people to participate in the upcoming redistricting cycle. Our work is preparing the public with knowledge about redistricting, why it matters for decisions large and small, and tools to engage in the process. Through this program, Leagues have hosted hundreds of educational events, led dozens of trainings on key skills such as preparing testimony, and have followed the lead of community allies to fight against racist voter suppression tactics.

Fair maps means that maps are drawn to protect the interests of the people and communities.

We are kickstarting the work now to organize, educate, and build a base that is prepared to participate in state-based processes for drawing maps. Now is the time to get ready, build momentum so that when the census data becomes available, we are all ready to get to work. Fair maps means that maps are drawn to protect the interests of the people and communities. No one person or one organization can determine what fair maps look like which is why we will anchor these efforts with our partners.

Redistricting influences political power. It determines district lines and gerrymandering can impact who is elected to represent the people and make critical decision which impact everyone. Therefore, it has a direct bearing on what issues a legislature chooses to take on or ignore.

Martin Luther King III said, “If we are to be a great democracy, we must all take an active role in our democracy.” Luckily, there are many ways to participate. This week, Congress will be voting on the For the People Act (H.R.1) -- a piece of legislation that promises to expand on key voting rights issues including by curbing partisan gerrymandering. On March 3, 2021, at 5pm, we are hosting a friendbank where we will encourage people in our personal networks to get involved in the fight by asking their legislators to vote yes on H.R.1. and you can join us by registering here!

You can join the ongoing fight for fair maps near you! How?

Press Release / November 3, 2021
League Urges Senate to Vote Yes on Freedom to Vote Act
In a memo to the US Senate, LWV urged Senators to support passage of the Freedom to Vote Act.
Letters / September 23, 2021
Only 11 Black Senators in U.S. History