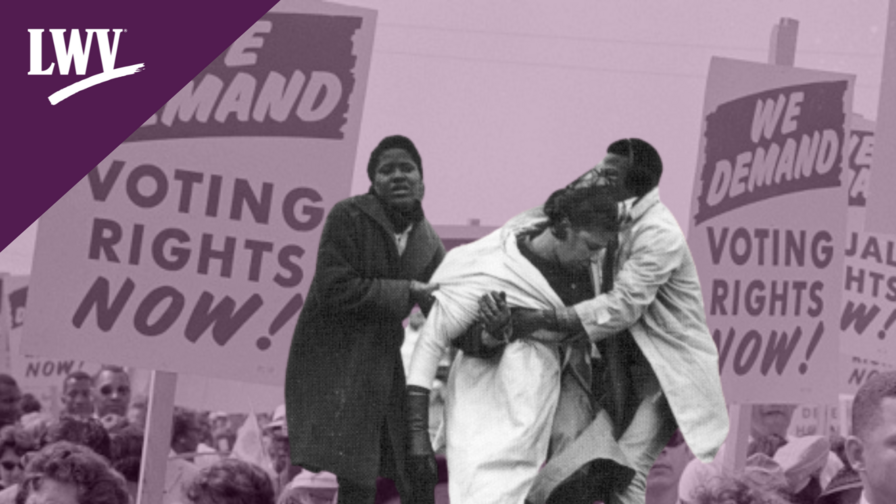 On March 7, 1965, hundreds of civil rights protestors attempted to march the 50 miles between Selma and Montgomery, Alabama to protest the suppression of Black votes. Led by the late John Lewis and Hosea Williams, they made it to the Edmund Pettus bridge in Selma, where they were brutally attacked by local policemen and state troopers.

In the years to come, activists like John Lewis would be rightly lauded for their leadership and the enormous risks they took while marching. Yet less is known about the women who marched on that historic day; here, we honor their work alongside that of their peers.

While the post-Civil War Jim Crow period of US history took place in the 1860s and 70s, racist “Jim Crow laws” limited the freedoms of Black Americans until a full century later. This included the freedom to vote.

In many states, Black citizens were effectively disenfranchised through a combination of poll taxes, literacy tests, residency requirements, and more. This was true in Selma, Alabama, where as of 1964, the population was 85% Black, yet only 1% of those individuals were registered to vote. Literacy tests and long wait times discouraged people from voting, despite voter registration efforts by the Student Nonviolent Coordinating Committee (SNCC) and others.

In 1965, activists in Selma attempted to push back against these discriminatory requirements with voting rights marches. Then-Governor George Wallace countered these measures by banning nighttime marches, but to no avail.

On February 18, 1965, police assaulted marcher Viola Jackson during a peaceful protest, beating her with a billy club in the restaurant where she was seeking refuge. When Jackson's son, 26 year-old civil rights activist and church deacon Jimmie Lee Jackson, intervened on his mother's behalf, he was shot and killed by a state trooper. Spurred by the murder, activists planned what would become the Bloody Sunday march, designating its endpoint outside of Governor Wallace's office. 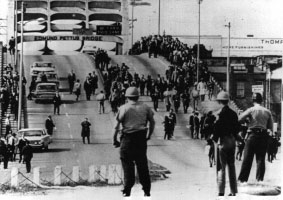 One could consider Viola Jackson to be among the first victims of Bloody Sunday, as her assault and the murder of her son spawned the action. It is difficult to determine whether Jackson marched on Bloody Sunday, as the identities of most marchers are unknown. If she did, she would have been one of many women risking their lives for the freedom to vote.

Women of all ages and walks of life participated – like eight-year-old Debra Barnes Wilson and her grandmother, Julia Barnes. Due to Barnes’ asthma, the duo were forced to turn back before the violence began; once it did, they provided refuge within their housing project for those looking to escape assault by law enforcement. Barnes Wilson's memories of that day include the sound of screaming and the smell of tear gas.

Years later, Barnes Wilson partnered with Auburn University to identify the Bloody Sunday marchers. As she said, "My maternal grandmothers and I participated in the March. ... I will never forget the sights and sounds of the horrible day." 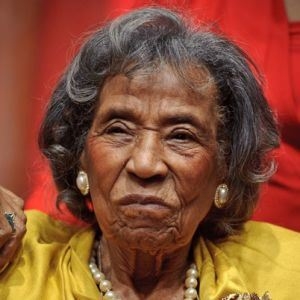 Those sites and sounds were transmitted to Americans across the country through television and picture; this media attention is considered a major factor in the public's awareness and response to the event. Some of the most famous images are those of Amelia Boynton Robinson, a member of the Dallas County Voters League known for having a sign in her office that said “A Voteless People is a Hopeless People.” The image at the top of this blog is one of Boynton being helped after passing out due to tear gas.

Robinson spent much of her life fighting Jim Crow; in 1964, she became the first woman to run for Congress in Alabama, garnering 10% of the vote. Later, she hosted Martin Luther King Jr. and the Southern Christian Leadership Conference (SCLC) in her home, where they planned the Selma to Montgomery marches.

On March 7, she was among the protestors attacked on the Edmund Pettus bridge. Pictures of her assault circulated across the US. In the aftermath of the eventful day, she participated in a successful march from Selma to Montgomery under armored guard. In 2015, she joined Rep. John Lewis and President Barack Obama in marching across the bridge once more to commemorate Bloody Sunday's 50th anniversary.

Robinson was on the front lines of the march alongside Marie Foster, another organizer and member of the Dallas County Voters League. Prior to the march, Foster became one of the few Black members of her community who was registered to vote; it took her eight tries to successfully register. She used her experience to teach classes on how her fellow Black Alabamans could pass the "tests” used to prevent Black Americans from registering. Like Robinson, she was physically assaulted on the Edmund Pettus bridge and went on to march under protection from Selma to Montgomery.

Later in life, Foster was appointed to the Dallas County Board of Registrars and worked on the presidential campaign of Reverend Jesse Jackson. 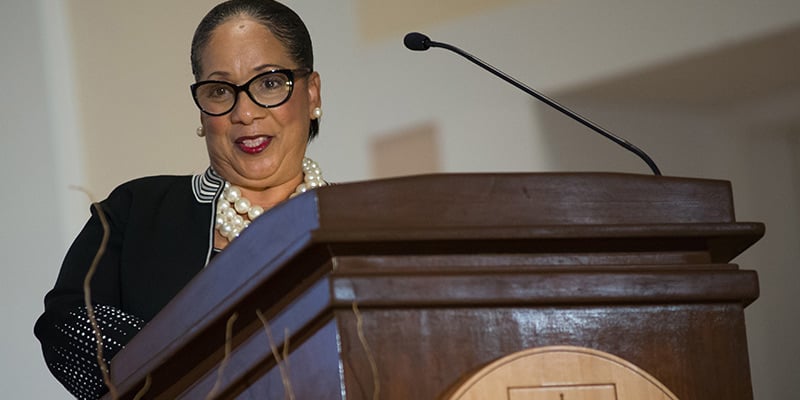 “I had never faced the troopers before,” reported Rachel West Nelson, who was nine at the time of the marches.

Nelson and her friend Sheyann Webb-Christburg, also nine at the time, famously recounted their experiences on Bloody Sunday in the book "Selma, Lord, Selma.” The two became involved in the voting rights movement by chance, when they were playing outside of their local church and a car "carrying several activists rode up."

Webb-Christburg reports, “As one man was getting ready to put this suit coat jacket on this man, he looked at us and said, “Do you know who this man is?” The man turned out to be Martin Luther King, Jr., who introduced himself to the girls. They went on to attend several strategy meetings with Dr. King before participating in the march itself, when Webb-Christburg snuck out of the house to dodge her apprehensive parents.

They were right to be wary. Remembering Bloody Sunday, Webb-Christburg says, “It was like I was looking at a sea of blue. Hundreds of state troopers with billy clubs, policemen with tear gas masks, the dogs and horses. My heart had begun to beat faster because I knew that something was about to happen." As the attack commenced, she was carried to safety by none other than the late civil rights leader Hosea Williams.

Webb-Christburg and West Nelson's stories were adapted into a Disney movie in 1999.

These are only a few of the many women, most of them unidentified, who risked everything to end racist voter suppression. As a result of their efforts, we gained the Voting Rights Act of 1965, which prohibited the use of literacy tests and other discriminatory voting practices. 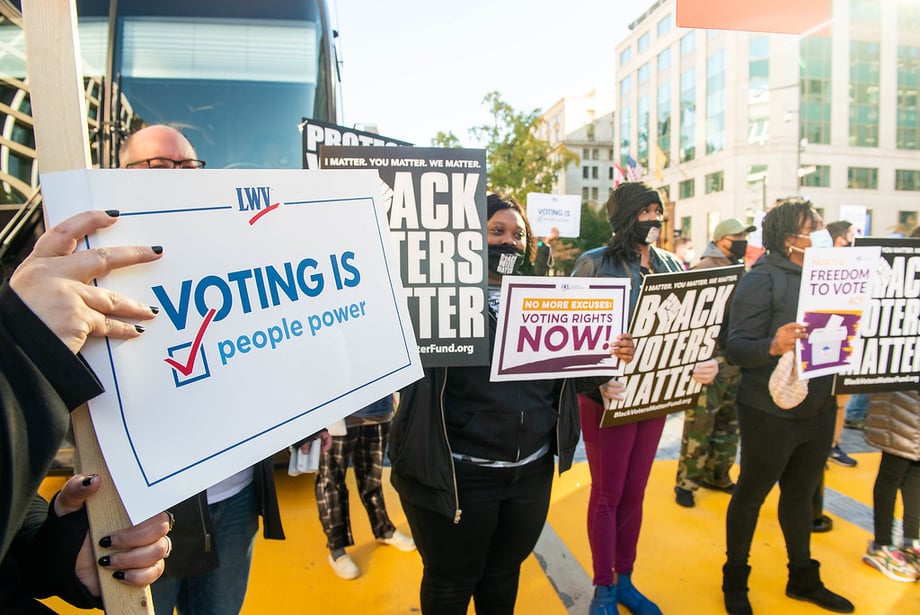 Their work is not a relic of the past. To this day, women across the country are fighting to preserve the tenets of the Voting Rights Act, particularly after its protections were gutted in the Supreme Court's 2013 decision on Shelby County v. Holder. Women, particularly Black women, continue to be leaders in the effort to advance racial justice within our electoral system.

In this moment, we can join them. We can follow in the steps of Viola Jackson, Debra Barnes Wilson, Julia Barnes, Amelia Boynton Robinson, Marie Foster, Rachel West Nelson, and Sheyann Webb-Christburg by joining voting rights organizations, advocating for the restoration of the Voting Rights Act, and making sure our fellow Americans are registered to vote.

Will you become one of the many women – or men, or nonbinary – activists in the fight for voting rights?

Let the women who marched on Bloody Sunday be your guides.

"Now is the time to make our voices heard, to awaken the activist inside each of us, and the most powerful way to do that is to vo