Activists from the League of Women Voters, People For the American Way, and Declaration for American Democracy Demonstrate for White House Voting Rights Action

WASHINGTON — Today, five voting rights activists were arrested in front of the White House in a demonstration calling on President Biden to take immediate and meaningful action for the freedom to vote. 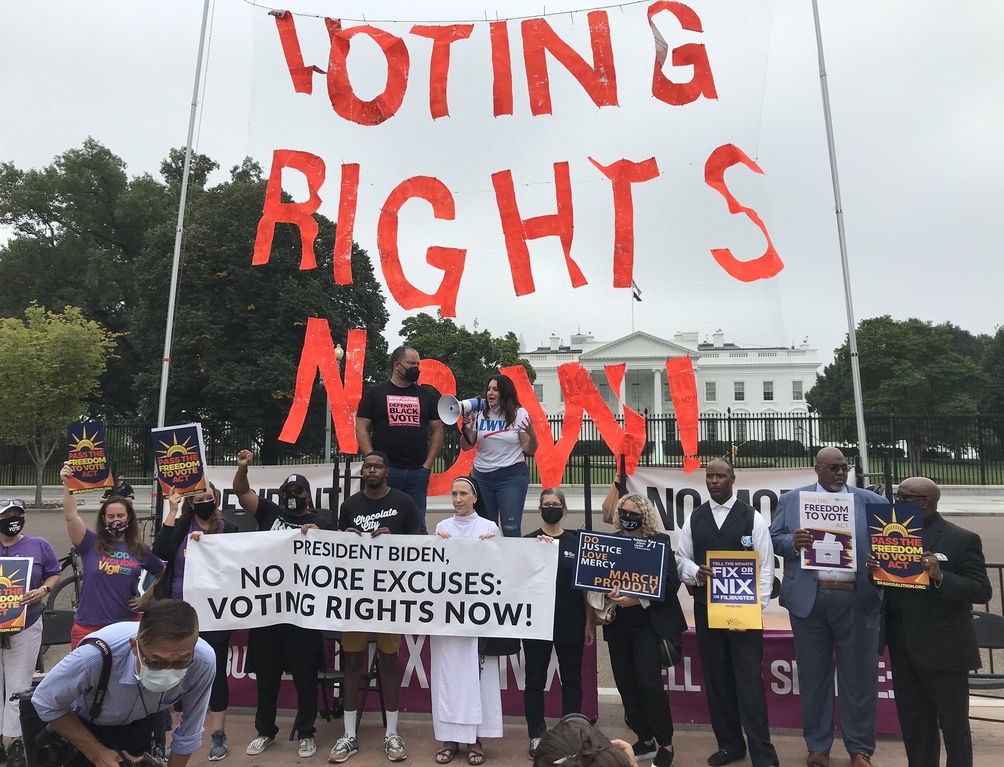 The action was led by the League of Women Voters of the United States, People For the American Way, and Declaration for American Democracy. A diverse group of activists, including actress Kathleen Turner, members of the clergy, and civil and voting rights advocacy leaders participated in the march to and demonstration in front of the White House.

The following individuals were arrested during today’s action:

“Voters all over the country are demanding action right now,” said Virginia Kase Solomón, CEO of the League of Women Voters. “We are here today to get into good trouble. We call on President Biden to step up and use the full power of his presidency to restore and protect our freedom to vote. The President must bring lawmakers together on the Freedom to Vote Act and the John Lewis Voting Rights Advancement Act to protect and expand the right to vote for millions of Americans. Like our suffragist mothers before us, we will not rest until the right to vote truly belongs to all Americans.”

“We took this highly visible action on the president’s doorstep today because the American people are out of patience with government inaction on voting rights — and President Biden has the power to break this logjam. He can and should use all the influence of his office to get the Freedom to Vote Act passed in the Senate, including persuading his caucus to dump the Jim Crow-relic filibuster. It is critically important that even while Congress is wrestling with infrastructure and the debt ceiling, we don’t lose sight of the fact that our fundamental right to vote is being stripped away. And we’re going to keep escalating the pressure on Biden until he takes concrete action to protect voting rights,” said Ben Jealous, president of People For the American Way.

“We took this action today because our democracy and our freedom to vote are in peril,” said Jana Morgan, director of the Declaration for American Democracy. “President Biden and the Senate must do whatever it takes to pass the Freedom to Vote Act. Protecting our right to vote is too important for outdated procedures or loopholes, like the filibuster, to stand in the way. We urge President Biden to put his words into action and use the full power of the oval office to let nothing stand in the way of passing the Freedom to Vote Act. Failure is not an option.”

Watch a recording of the demonstration.