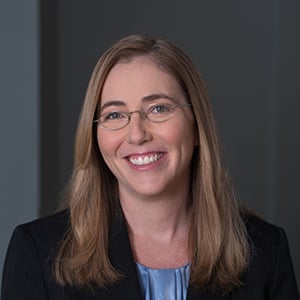 Jeanette M. Senecal is the Senior Director of Mission Impact for the League of Women Voters. Jeanette joined the League in 1999 as part of the e-Democracy team. With a background in tackling community improvement challenges in multi-cultural environments, Jeanette jumped right into the development of DemocracyNet, a first-of-its-kind voter information website from the League that helped alter how voters interacted with candidates, campaigns and democracy.

Jeanette’s tireless work with the over 500 DemocracyNet employees and volunteers nationwide provided the lessons and a roadmap for her to launch the League’s award-winning VOTE411.org website in 2006. A key part of the League’s voter engagement and education work, VOTE411 reached over 4 million voters in 2016. Jeanette also leads the League’s efforts on issues such reforming and modernizing election laws and expanding civic engagement and empowerment opportunities for all voters. Much of Jeanette’s expertise focuses on helping Leagues and volunteers innovate and engage with voters both online and offline and providing ongoing strategic guidance to Leagues and partners alike. Jeanette is often a vital resource on League communications and marketing efforts.

As senior director for elections, Jeanette also heads up initiatives such as the Public Advocacy for Voter Protection project and voter registration programs in high schools, community colleges and naturalization ceremonies that protect and reach out to the nation’s underrepresented voters. Her leadership on the 5 Things You Need to Know on Election Day campaign and the Election Assistance Commission’s (EAC) Successful Practices in Pollworker Recruiting, Training and Retention project has helped position the League as a national leader in the election and voting arena.

Originally from New York, Jeanette attended St. Lawrence University, where she received a BA in Government and Environmental Studies and an MA in International Affairs from George Washington University. When not helping Making Democracy Work® and following her passion to protect our planet’s precious natural resources, Jeanette is spending time exploring the world with her husband and two young children and is looking forward to teaching her soon-to-be three-year-old to ski this winter.

Giving Thanks to the People Behind Our Elections in 2020 (Blog)

Alexa, what time are my polls open? (Blog)

Alexa and VOTE411 have teamed up to add more voting logistics information to Alexa!

Creating a voting plan that fits your needs makes casting your ballot easier and less prone to complications. This year is unlike any other election year in recent memory. And at the League of Women Voters we know that there is a lot of information out there to sift through as you develop the best voting plan for you.  Here are four easy ways that VOTE411.org can help you get started on your plan today.

VOTE411 now has everything you need to know about election changes during COVID-19—in both English and Spanish.

10 Things Elections Officials Can Do to Safeguard Our Elections This Spring, Summer, and Fall (Blog)

Have you made an Election Day plan? (Blog)

Election Day just three weeks away. Voters across the country will participate in important state and local elections on November 6.

September is National Voter Registration Month—and Leagues across the country are working hard to make sure eligible voters are registered to vote.

The SCOTUS Appointment Is More Than A Nominee, It Represents The Direction of America (Blog)

The American people deserve to know where a nominee stands on basic principles, as the Court's decisions will affect the direction of our democracy for decades to come.

VOTE411.org served thousands of voters on the May 8th primary. The website is on track to help more than 2 million Americans this election year!

Today, the Supreme Court heard arguments in Husted v. A. Philip Randolph Institute. I joined other advocates calling for an end to voter purges.