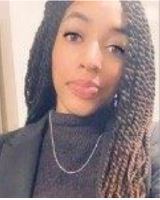 Toni first came to the League in 2014 when coordinating voter registration at a local university. In 2018, Toni worked with the same League on the 100th Anniversary of the 19th Amendment. Thereafter, she became a member of the LWV Greater Omaha and was Voter Services Co-Director for both the local/state of NE League. Most recently, she served as Co-President of the LWV of NE from May 2021 - April 2022. She is a Training Facilitator for a Department of Education contractor and also volunteers with her sorority Zeta Phi Beta Sorority, Inc., and the National Coalition of 100 Black Women.