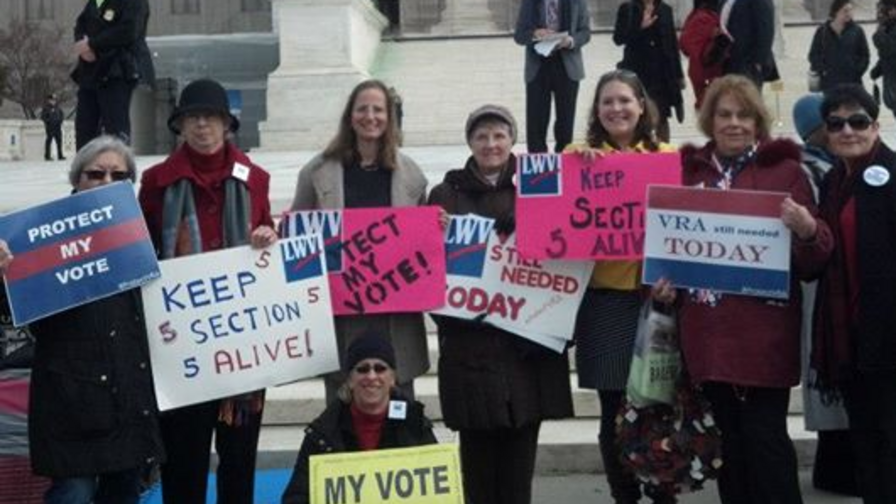 50 Years After the March on Washington, the Fight for Voting Rights Continues

August 24, 2013 marks the 50th anniversary of the historic March on Washington. In 1963, the March on Washington was the largest mass protest in American history when 250,000 women and men of all ages and from all different backgrounds came together to express their hopes for freedom, justice and change. The March, which ultimately pushed Congress to pass the Civil Rights and Voting Rights Acts, helped close the door to the Jim Crow era and usher in critical voting rights protections. The work that began over 50 years ago continues today, especially in light of the U.S. Supreme Court’s decision to gut the Voting Rights Act (VRA). The decision to remove one of the VRA’s key enforcement mechanisms erases fundamental protections against racial discrimination in voting that have worked to protect our democracy for over 40 years.

But – much like those brave Americans 50 years ago – the League of Women Voters refuses to remain silent. Tomorrow, League members from across the country will join thousands of advocates as well as renowned civil rights leaders, including Representative John Lewis, Martin Luther King, III, in commemorating the 50th Anniversary of the March on Washington. Together, we’ll rally at the Lincoln Memorial and call for immediate action from Congress to protect our democracy and restore the Voting Rights Act.

Join us in protecting our democracy by urging your members of Congress to work quickly to repair and restore the Voting Rights Act.

The Voting Rights Act is crucial to preserving our democracy and protecting against voter discrimination. For nearly half a century, the VRA has been effective in preventing racial discrimination in voting and helping to ensure that our voting system is fair, free and accessible for all eligible voters. The law helped the U.S. Department of Justice block over 700 racially discriminatory voting measures  from 1982 through 2006 alone, in addition to thwarting voter discrimination as recent as this past election cycle.

The Supreme Court’s decision has led to an all-out attack on voting rights across the country. Within just 24 hours of the ruling, five states moved forward with discriminatory voting measures, including in states in which the League of Women Voters had previously succeeded in blocking voter restrictions. And this could be only the beginning.

The good news: Strong action from Congress can protect our voting rights. We need your help in telling Congress that we must act swiftly to stop the damage and repair and restore the Voting Rights Act.

Signs of action by Congress have so far been promising. Both the Senate and House of Representatives recently held hearings to discuss solutions to protect voting rights. Representative Jim Sensenbrenner (R-WI), who led the VRA's reauthorization efforts in 1982 and 2006, reaffirmed his commitment to the landmark legislation. Representative John Lewis (D-GA), who worked beside Dr. Martin Luther King, Jr. in the fight for the passage of the VRA and later with Rep. Sensenbrenner on its reauthorization in 2006, expressed the law's continued vital importance to our democracy. The federal government has pledged to prevent discriminatory voting measures from taking hold; the Department of Justice has announced plans to challenge Texas’ discriminatory redistricting maps. Momentum for voting rights protections is also rapidly growing in North Carolina, where League members have mobilized against restrictions on the right to vote.

The League will continue to pursue all avenues to fight for voters’ rights, but we need your help in encouraging strong action by Congress to restore the Voting Rights Act. Tomorrow, as we galvanize Americans everywhere to voice their support for democracy and the hard-won victories of the 1963 March on Washington, add your voice to those in Washington by urging your members of Congress to work quickly to repair and restore the Voting Rights Act.