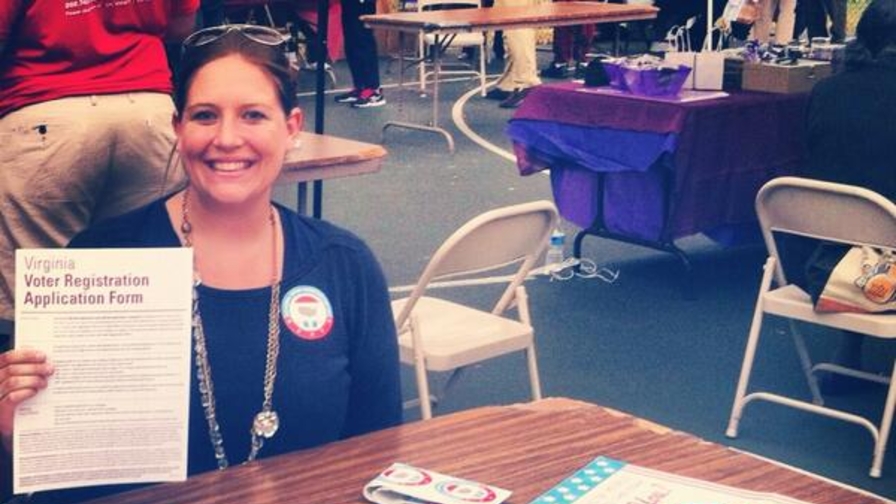 Question: What do Pearl Jam, Rep. Nancy Pelosi, the Arab American Institute and the Georgia Teen Republicans have in common?

Answer: They took time out of their day yesterday to celebrate National Voter Registration Day!

Yesterday, a record 800+ groups—including nearly 300 League of Women Voters affiliates in 43 states—headed out into their neighborhoods to help Americans register to vote or update their registration. Thousands of volunteers picked up their clipboards and gathered on street corners, at bus stops, in classrooms, and in front of grocery stores. Many more participated by mobilizing their social media networks in support of voter registration. And while National Voter Registration Day supporters represented an endless array of interests, backgrounds, and experiences, they all had a simple message in common: every eligible American deserves the chance to register and vote, and EVERY voice is needed in our one-of-a-kind democracy.

With field reports and media stories still coming in, it is already clear that the second annual National Voter Registration Day will rival 2012’s inaugural effort. What started as an experimental idea among a few nonprofit organizations has quickly snowballed into a major annual event nationwide. Major government leaders—including prominent Members of Congress, the bipartisan National Association of Secretaries of State, and President Obama—have taken notice. So have major media outlets including BET, MSNBC, CNN, as well as dozens of regional outlets.

At a time when American families are grappling with complex questions about financial security, healthcare, educational opportunities, immigration, and more, it has never been more important for our halls of power to actually reflect the diversity of our communities.  I couldn’t be happier that more Americans will have a say on Election Day because someone took the time to help them register to vote yesterday.

I think League president Elisabeth MacNamara said it best yesterday, when she told a crowd of New Yorkers: “We come from all walks of life, and we vote for lots of different reasons… we all deserve the chance to take part in deciding the direction our country is headed, and we all have a role to play in standing up for what we believe in.”

As both a League staff member and a local League board member, I am bursting with pride that so many League volunteers took part in this incredibly positive and exciting celebration of American democracy. Check out some great photos here, or follow the #CelebrateNVRD hashtag on Twitter for additional updates.

I can’t wait for next year, can you?!