This blog post was contributed by LWV of Connecticut president Carol Reimers.

Election security is all about voter confidence.  If voters lose that confidence, if they feel their voice is not being heard, that’s a bigger problem for society.

This is what I shared as a member of a panel on Election Security.  Connecticut Secretary of the State, Denise Merrill, asked me to join her, Congressman Jim Himes, and UConn Center for Voting Technology Research Director, Alex Russell to raise awareness on election security.

It was clear to the entire panel that threats to election security are a serious concern and they will most likely never go away. That being said, we must still be vigilant to prevent all types of election tampering, from foreign attempts to hack voting machines to social media posts by people who want to influence the vote with false identities and information.  We know that there are multiple attempts to penetrate and change the election process appearing every day.

Congressman Himes noted that the nation’s “security apparatus— Homeland Security and FBI — has learned a lot. … Our outward-facing security services are very, very good.”  But what he is more concerned about is the “successful penetration of the American electoral system through technological means” by using misleading or false ads running on social media outlets.  “These are very sophisticated injections into the uglier fissures of American society designed to get people riled up and angry,” he said. “How can we as American citizens inoculate ourselves against stuff that might get our passions boiling, our anger boiling but is designed to manipulate us as citizens in a democracy.”

Secretary Merrill concurred with Himes that the greatest threat to campaigns is disinformation.   Russian IP addresses did try to penetrate the Connecticut system but the firewalls and other processes held.  Connecticut has established a cybersecurity task force and they will be using the $10 million received from the federal government to monitor the system.  However, more funding is needed as safe voting machines and cybersecurity is a costly endeavor.  The funds still waiting to be approved by the U.S. Senate would help immensely.

What can we do?

The League is working on better election security legislation. We, as individuals, each have to take responsibility for what we read, say and do on social media.   There are things that citizens can do to fight attempts to influence elections:

Alex Russell suggested two approaches, the first one being education. “Humans are slowly adapting to the device they have with them 24/7 and need to realize not everything you see online is the truth, the other part is to try to provide whatever protection we can through regulation.”

Congressman Himes stated that there are major issues at play, in that “a new and immensely powerful technology that we’re still figuring out bumps headlong into a deeply held value of freedom of expression.”  He was pleased that Twitter has decided to not run political ads and hoped that Facebook does the same. And while they do not face First Amendment issues since As private companies they do not face First Amendment issues but “how much do you want [them] to decide what you see?”

The problem is twofold: what can happen and what people perceive. Congressman Himes shared that “It’s really important to have conversations. There are vulnerabilities,” but as someone who sees threats early, through his position on the House Intelligence Committee, he is “watchfully optimistic.”

“We are on the job. We’ve got lots of good advice and we’re using best practices. Things can always go wrong. It’s how we deal with it in the aftermath, ” added Secretary Merrill.

The bottom line is that we all know that voter confidence is essential to a well-functioning democracy.  Government must be watchful and wary.  Citizens need to know that when they cast their vote they will be participating in a safe and secure election process. 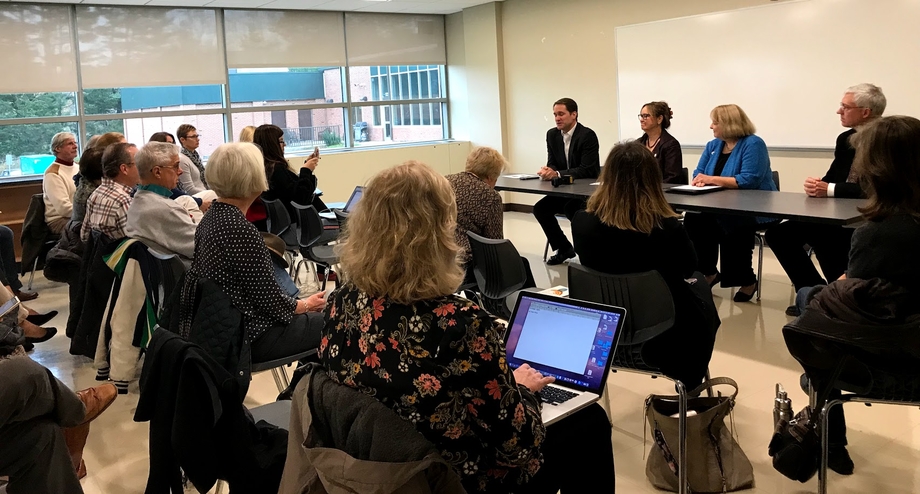 The League joined a letter written by the Leadership Conference on Civil and Human Rights with 60 other organizations to urge the Senate to reform the outdated Electoral Count Act of 1887 before the end of the year. The Electoral Count Reform and Presidential Transition Improvement Act, S.4573, represents a significant advance forward to securing and protecting our democracy from future attacks on presidential elections.

Letters / December 12, 2022
10 Things Elections Officials Can Do to Safeguard Our Elections This Spring, Summer, and Fall

LWV of North Carolina supports the Board of Elections’ decision to delay certification of the results of the 9th Congressional District election until a thorough investigation has been conducted.