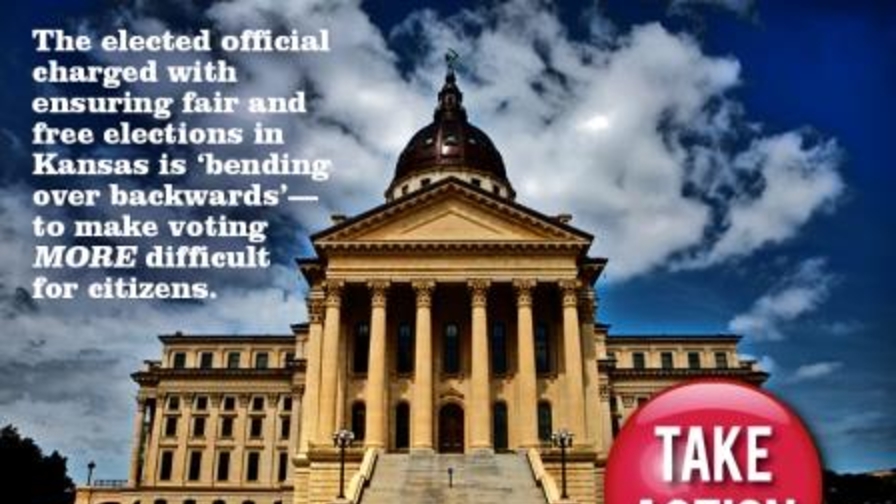 Bending Over Backwards in Kansas

Talk about adding insult to injury.

A state senator defending Kansas’ outrageous proof-of-citizenship voter registration requirement claims it’s out of “kindness” that his state is “bending over backwards” to help people register to vote.

First, a restrictive law in Kansas, championed by their Secretary of State, requires voters to present a birth certificate or other proof-of-citizenship when registering to vote.

But because most people don’t carry that type of documentation around with them, tens of thousands of voters, mostly young people, who have attempted to register to vote have had their applications “suspended” until they could present proof-of-citizenship.

Then, last month, Kansas’ Secretary of State ordered county election officials to begin purging all suspended applications more than 90 days old—forcing tens of thousands of potential voters off the rolls without enough time to provide the needed proof-of-citizenship. What’s worse is that many people who are purged won’t even know it until they show up to vote on Election Day!

In other words, the elected official charged with ensuring fair and free elections in Kansas is “bending over backwards”—to make voting MORE difficult for citizens.

It is a profoundly outrageous action.

And it’s something the League of Women Voters of Kansas (LWVKS) refuses to accept. The League immediately launched an emergency initiative to reach all affected voters and help them complete their applications before they’re purged from the rolls.

It’s a massive undertaking—and I hope you’ll take a quick moment to join me in sending the Kansas League your message of support.

And please accept my thanks for standing with the League in defending voting rights and protecting our democracy by increasing citizen participation—in your state and all across the country!