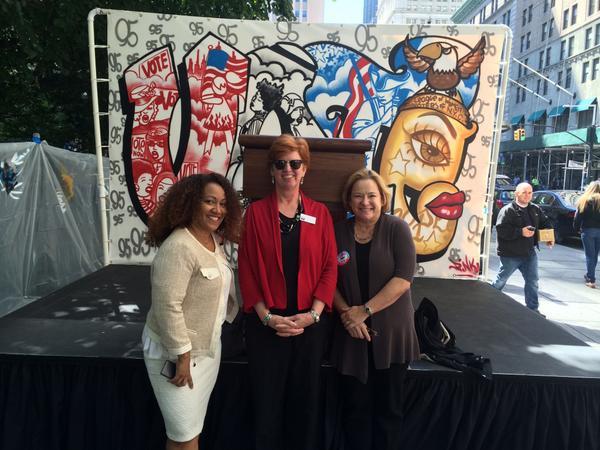 It has been quite a week and it is only Wednesday! Sunday, members of the League of Women Voters of the City of New York were joined by League members from as far away as Oregon in a colorful and enthusiastic march on climate change. Proudly carrying the League banner, members rallied support for addressing this critical issue. The best way for Americans to influence the environmental policy debate, along with so many other important policy issues, is to vote.

Registration is the key to participating in the elections in November that will decide who represents us on Capitol Hill and in statehouses and local offices all across the country. Yesterday, on National Voter Registration Day, in New York City and at hundreds of events around the country, League members reminded Americans that every election is important and that voter registration deadlines are rapidly approaching. In total, nearly 400 Leagues participated in 48 states! In New York, the League and its partners set up tables, provided speakers and entertainment to celebrate the unofficial holiday. The League sponsored urban artist, Lady Pink, who sprayed painted on canvas, the word “vote” using the images that remind us how important the vote is and how hard so many have had to work to get it.

As one of the featured speakers, I was honored to attend this wonderful event. I got to vote in a mock election, weighing in on the most important reason to vote. Making our voices heard in our community was my choice and it was also the winning choice! On Broadway, in the busy financial district, in front of City Hall, New Yorkers could register to vote, update their registrations and learn about the League’s online elections resource, VOTE411.org. Attendees could even take a little time to dance and many took full advantage of the opportunity! Over an extended lunch hour, the traffic never stopped.

But the New York City League was not alone. Around the country, Leagues used creative and entertaining means to draw attention to the importance of registering to vote. In North Carolina, there was a bluegrass concert; in Miami, a huge community college event featuring the League and its partners as well as TV star Wilmer Valderrama. League members, armed with clipboards and registration forms hit the subway stations, bus stops, grocery stores, schools and baseball games. The League’s work, and the impressive work of the many other partners in this day, was featured in hundreds of news stories. And on social media, the #celebrateNVRD hashtag was used more than 45,000 times—including by celebrities Pearl Jam, Jon Stewart of the Daily Show, Crosby, Stills, and Nash, Rosario Dawson and many more.

In 2012 and 2013, on this single day, thousands of partners helped more than than 350,000 voters get registered or update their registration nationwide. This year looks to be just as great a success. When the stats show one in four Americans is not registered to vote, yet 75 percentof those registered make it to the polls in major national election years, the importance of this day is obvious. Do you need to register or to update your registration? Use our online voter registration tool – and then ask your friends to do the same!