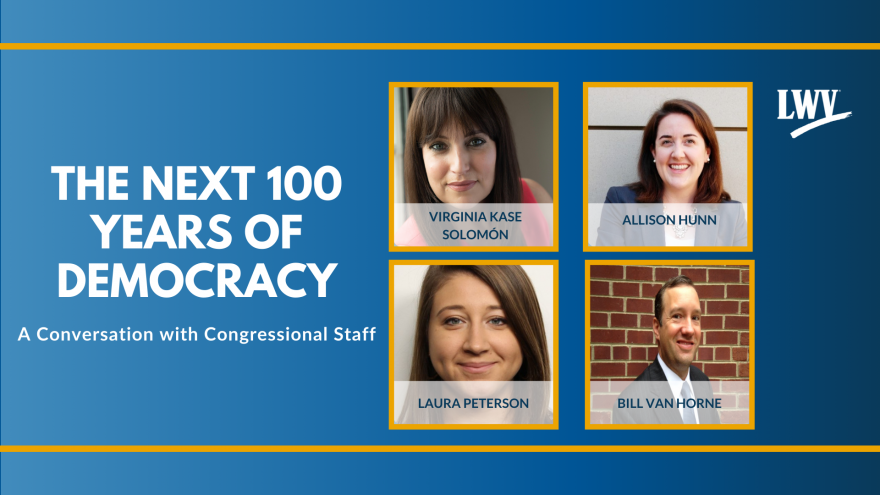 In 2020, we commemorated the 100th anniversary of both the League of Women Voters and the ratification of the 19th amendment. Since the 19th amendment passed in 1919, numerous civil rights strides have been made to expand the right to vote and increase access to the ballot box. Throughout the past century, the League has played a significant role in advocating for fair representation and the expansion of voting rights.

As we enter our 101st year, it is time to look forward to what the next century of American democracy entails. To kick off this discussion, the League hosted a Congressional Conversation to talk about the next hundred years of democracy and envision a future where we can all work together to make sure our democracy remains strong and inclusive.

As Dr. Deborah Turner noted in her introductory remarks, in just the last few years, the country has experienced some of the most significant expansions and threats to voting rights and democracy in our history. In 2020, as the country grappled with the horrific pandemic, we had to figure out how to administer and participate in a presidential election.

Despite these challenges, the 2020 election was a historic success because of the hard work of local election officials and the crucial expansion of voting by mail. The election saw historic voter participation that shattered records as millions of new voters made their voices heard.

Unfortunately, this triumph would also lead to the rise of the greatest threat to voting rights since Jim Crow.  Post-election, false narratives about voting continue to challenge the foundations of our democracy. They’ve caused a surge of anti-voter legislation and laws that attack voters and their rights. The panel discussed the resurgence of anti-voter sentiments and legislation during the event.

Bill Van Horne noted how “voting rights [are] fundamental. You have to have voting rights and an engaged citizenry…if you want to make progress” on all number of issues from “immigration, gun safety, environment, or healthcare.” This shows how cemented voting rights are to our nation. They are essential to ensure our government functions and advances the will of the people.

Bill Van Horne noted how “voting rights [are] fundamental. You have to have voting rights and an engaged citizenry…if you want to make progress” on all number of issues from “immigration, gun safety, environment, or healthcare.”

While Americans grapple with anti-voter laws, the federal government has an opportunity to demonstrate leadership and protect voters. The 117th Congress has before them two of the most critical voting rights bills in decades, the For the People Act (S1) and the John Lewis Voting Rights Advancement Act.

The For the People Act is the bill that would make democracy real for all Americans. This legislation will put power back into the hands of American voters by making voting easier and more accessible and by modernizing future elections. During the conversation, Allison Hunn remarked how the For the People Act has widespread bipartisan support, referencing the over “ten recent bipartisan commissions that offered many of the recommendations that are captured” in S1.

Meanwhile, the John Lewis Voting Rights Advancement Act (VRAA) is vital to restoring full power to the Voting Rights Act, which was gutted in the 2013 Shelby County v. Holder Supreme Court case. In the next century, the VRAA will help ensure that any more attacks on our democracy and voting rights are held accountable. In his video, Senator Merkley explained that the VRAA is vital, as it would help ensure that “you cannot change your laws to make it harder for specific groups to vote.”

The Congressional Conversation served as an essential discussion to jumpstart the next century of the League’s democracy advocacy. Thank you to our panelists and Senator speakers for participating in this discussion. Your words are incredibly helpful in framing the debate around the advancement and threats to our democracy.

The Congressional Conversation is not the first nor the last time these themes will be addressed by the League; stay tuned for all the amazing work LWVUS has planned for the future! In the meantime, contact your Senators today and tell them to support the For the People Act!

It’s also important not only to put pressure on your representatives but on your friends, family, and community to get involved. As Laura Peterson said, when “it comes from [your] neighbor, or it comes from the person who [your] kids go to school together, it makes it more human and makes it more tangible.” So go out into your community and engage in these conversations on why we must and how we will protect, defend, and grow our democracy going into the next 100 years!

We encourage all those who were not able to attend to watch the panel here!