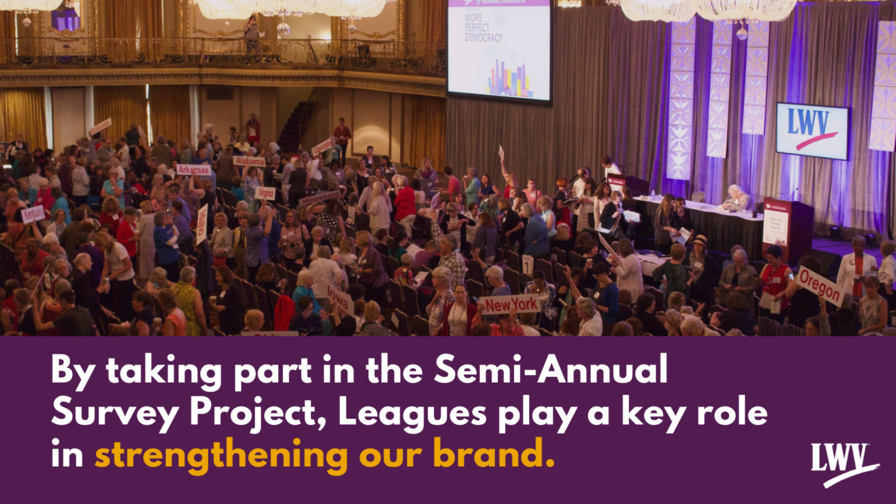 As the League moves into our second century, we do so with a focus on the importance of effectively telling our social impact story.

In 2019, I joined the League of Women Voters to help build culture of evaluation focused on outcomes of our work. A core part of this effort is collecting and sharing information. To this end, during the Fall of 2020 we launched the Semi-Annual Survey Project.

Through this effort, we field two surveys each year (typically in the November and late Spring) that capture State and Local Leagues’ activities, partnerships, and efforts in key communities. By taking part in the Semi-Annual Survey Project, Leagues play a key role in strengthening our brand.

The first Semi-Annual Survey (1.1) provides insight into how Leagues engaged in their communities during 2020. The survey was open between November 5, 2020 and December 4th, 2020 and was available to all League entities (State Leagues, Local Leagues, Inter-League Organizations, and MALs) to complete. A total of 479 Leagues responded to the survey (41 State Leagues, 373 Locals Leagues, 5 Inter-League Organizations, 10 MALs).

The results of the survey are grouped into the following sections:

During 2020, responding Leagues participated in more than 12,000 election-related activities. Most of these activities included panel discussions, townhalls, forums, rallies, and press conferences.

Due to COVID-19, many activities were held online. Through these election-related activities, Leagues recruited more than 21,000 volunteers.

During the 2020, Leagues registered and contacted voters while taking part in Election Day activities.

Throughout the 2020, Leagues engaged various communities in their electoral work.

Join us on May 4th, 2021, for a webinar to discuss our second Semi-Annual Survey. During this conversation, we will be joined by LWV Board Members to discuss the areas of focus for the survey and learn about supports to help you track and report on your League’s data. RSVP at this link.

Thank you to all those who contributed to the 2020 survey and our efforts to empower voters nationwide.

Our members are passionate activists who support our work in all 50 states and in more than 700 communities. Join us today!