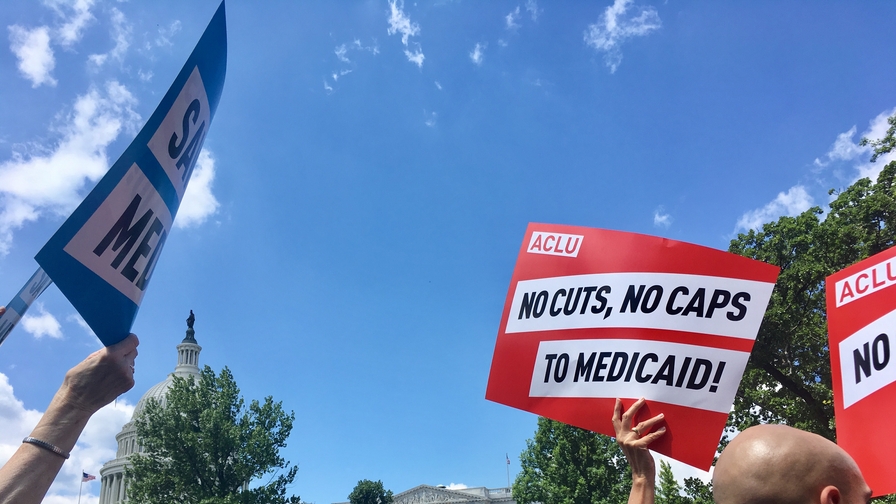 This week, League Interns had the chance to hear the personal side of the effects of possible cuts and caps to Medicaid at the Don’t Cap My Care rally hosted by the Center for Public Representation on Capitol Hill.

Citizens from many different communities joined together to protest the ACHA and the proposed caps on Medicaid. Senators and community leaders gave passionate speeches about the ways that Medicaid assists their constituents and loved ones—and they encouraged the crowd to get involved by contacting their Senators and Representatives. The crowd was diverse in more ways than one: we stood next to and heard from passionate members of the deaf, autistic and wheelchair-using communities. Diverse organizations showed their support including the ACLU, Project SEARCH, Human Rights Campaign, National Partnership for Women and Families, the National Women’s Law Center, and Autistic Reality.

Congress continues to debate the future of healthcare in America. Currently, a small group of Senators are determining the next steps in the fight to change the Affordable Care Act. The recent analysis done by the non-partisan Congressional Budget Office on the House version of repeal, the American Health Care Act (AHCA), estimates that the proposed cuts would reduce the federal deficit, but by $32 billion less than the figure listed on the House Committee on Rules’ website. Additionally, 14 million more people would be uninsured by the AHCA than under the current law. Premiums would likely be 15-20% higher than what people are currently paying. Furthermore, the AHCA’s modifications to Internal Revenue Code could cost billions of dollars.

With such profound financial effects on Americans, it is easy to understand why people showed up to the Don’t Cap My Care rally. The event’s speakers were engaging and visibly passionate about the cause. Alec Frazier of Autistic Reality shared that “Medicaid has saved my life in many ways … I would be dead without it.” He encouraged those in the crowd to stay positive because he believes that everyone has the power to change the world for the better. Participants of the rally firmly believe that members of Congress on both sides of the aisle can stand up and support their families when it comes to Medicaid. Disability, financial insecurity, and healthcare access are issues that have touched the lives of most Americans—which means that all of us have a stake in preventing Medicaid cuts and caps from harming ourselves, our neighbors or our loved ones.

Healthcare legislation is complex and sometimes frustrating, but there are concrete steps that we all can take to educate ourselves and become knowledgeable advocates for all communities affected by threats to Medicaid.

One of the most powerful things you can do to put your knowledge into action is to call your members of Congress. The next step for legislation will be clearing hurdles in the U.S. Senate, so contacting your Senators is of the utmost importance. Since HR 1628 already passed in the House, Republican senators are now in the process of drafting an AHCA bill for the Senate. It’s unclear if the Senate bill will take the same approach to Medicaid cuts as the House bill, as some outspoken Republican Senators such as John McCain have voiced concerns with the proposed cuts to Medicaid. Additionally, Republican Senators Cassidy and Collins have been drafting an alternate bill in hopes of pushing through a bipartisan effort with moderate Democratic Senators.

If you need to look up who your U.S. Senators are and who your U.S. Representative is, the League’s Lookup tool is a great place to start. The League’s ACA Action Alert tool also makes it easy to send a message to your legislator, navigate the Capitol Switchboard, and view key talking points on healthcare legislation reform.

The League maintains that any legislation to replace the Affordable Care Act must include elements to cover preventive care, pre-existing conditions, must not discriminate against women and, as we rallied for today, ensure that Medicaid recipients can continue to receive full healthcare services.

Proposed cuts to health care affect us all—even our Representatives and Senators. Tell your Senators why this issue is important to you!