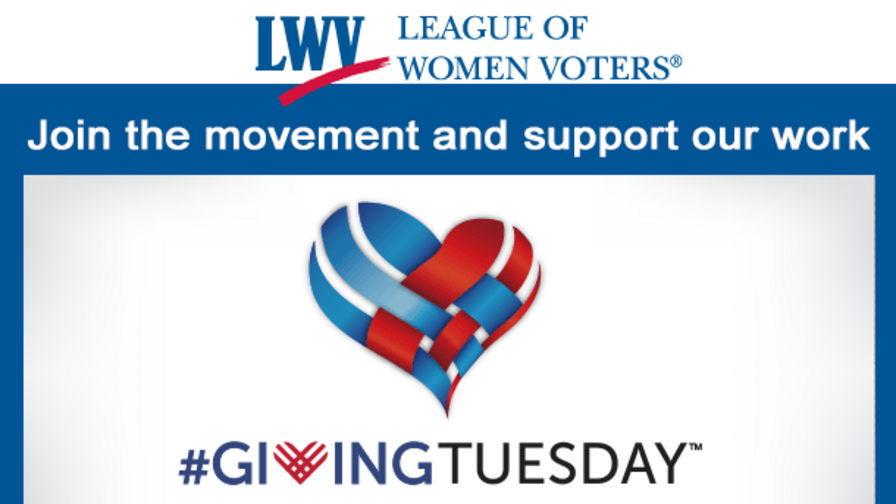 UPDATE: Celebrate #GivingTuesday by making a tax-deductible donation to the League now.

As we’ve been sharing with you over the past few weeks, the League is participating in the #GivingTuesday movement. In honor of #GivingTuesday, we’re taking some time to reflect on the work that League leaders have accomplished in communities across the country. So far, we’ve shared snapshots of the work we’ve done to protect voters’ rights, educate and empower voters, keep big money out of politics and defend the environment.

With just a week left before the big day, we’re sharing the League’s accomplishments on two of our other national legislative priorities this year: comprehensive immigration reform and gun control.

Curbing Gun violence is a matter of public safety and public health; the League continues to support common sense solutions to gun violence.  Our sights also remain on urging the House to pass comprehensive immigration reform. The League was founded upon the belief that our democracy is enhanced by a diversity of voices. We remain committed to help those living in the shadows to become a part of our great nation.

#GivingTuesday celebrates and encourages charitable activities to support nonprofit organizations like the League and is propelled by those who believe that individual action can make a difference. On December 3rd, we ask that you think of the League as you reflect on the need to strengthen our nation. Pledge to support the League’s work and we’ll send you a reminder email with an online donation form on December 3.

Senate and House leadership announced that protecting Dreamers is a high priority in the remaining time of the 117th Congress, leading the League to urge Congress to follow through and pass a bill. People who are protected by DACA, their families, and their communities deserve the peace of mind to build their lives and futures in the United States.

Letters / November 18, 2022
LWVUS Urges the US Department of Health and Human Services to Allow DACA Recipients to Enroll in Health Insurance Programs

Letters / October 25, 2022
Fighting each day for the America we aspire to be