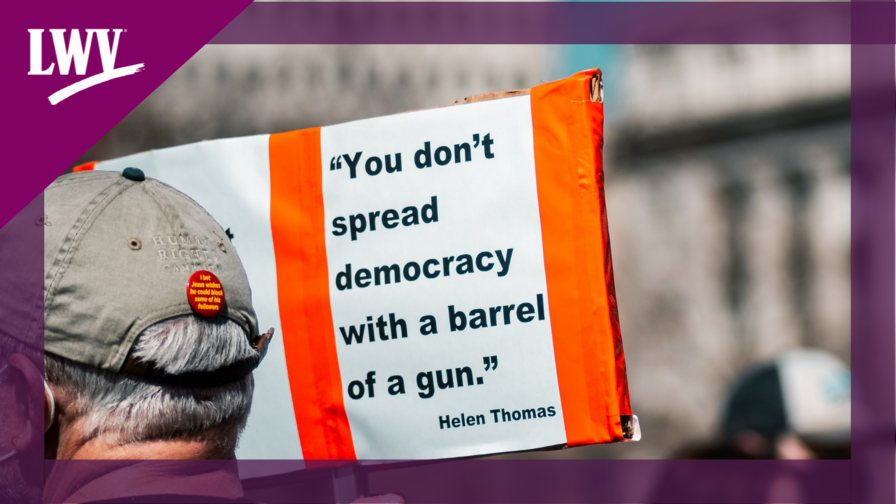 On November 3rd, the Supreme Court heard oral arguments in the case of New York State Rifle and Pistol Association v Bruen, marking one of the first times that the Supreme Court will address the scope of the Second Amendment since 2008.

The law in question: The Bruen case involves a New York law requiring people interested in obtaining a concealed carry license to show "proper” or “good” cause for doing so, i.e. a legitimate need for self-defense. The law requires that a person go beyond making a blanket self-defense claim and provide context for their need to carry a gun. LWV has filed an amicus brief in defense of the law.

The argument: challengers claim that these types of laws violate the Second Amendment by placing unconstitutional burdens on gun owners.

The law’s defenders call back to the 2008 case of  DC v Heller, when the Supreme Court held that the right secured by the Second Amendment is not unlimited and states have the right to create regulations to protect certain sensitive areas, including government buildings and voting locations.

If the Supreme Court strikes down this law, it would put similar laws in states including California, Massachusetts, Hawaii, Maryland, and New Jersey in jeopardy. So far, federal courts have upheld a majority of the laws like New York’s, citing the important role that these laws play in protecting public safety.

In September 2021, LWVUS, alongside the Leagues of Women Voters of New York and Florida, filed an amicus brief in this case. Our brief recognizes that the exact approach of the New York law might not be right for every jurisdiction, but that states should have the ability to regulate in a way that is right for their respective state or locality.

Specifically, the New York law is structured to address that it is a state with some of the most densely populated areas in the world. The types of public safety concerns that arise in New York might not be present in other states who have the flexibility to regulate based on the needs of their communities.

The Impact of Gun Laws on Elections

Our amicus brief also argues that the New York law is in line with the types of regulations that are allowed under the Second Amendment because it protects the safety of the electoral process.

There is a long history of firearms being used to intimidate voters, especially voters of color. One Supreme Court Justice concluded that since the beginning of Reconstruction, there has been a “coordinated [system] of intimidation and violence” against voters of color. This history has continued with the wave of voter intimidation in the past few elections.

Throughout this history of attempts to intimidate voters, the League has fought to secure the safety of election sites. One example is during the 2020 election, when the League fought to protect voters from violence at polling locations in Council on American-Islamic Relations of Minnesota (CAIR-MN) v Atlas Aegis. In this case, a private,armed, mercenary organization was hired to monitor various polling sites to prevent “voter fraud.” A federal district court judge blocked the organization from deploying members to intimidate voters and issued a five-year consent decree that prevented actions like this from happening in the future.

Empirical evidence also shows that guns increase the likelihood of violence during disagreements, and as our amicus brief points out, “conflicts arise at every phase of the electoral process — between voters who support opposing candidates, between protesters and counter-protesters at politically charged rallies, or with election officials counting votes — voters frightful of mixing guns with unrest may limit voting-related activity or even sit out of the electoral process entirely.”

Ensuring the safety of the elections and the public’s safety while exercising their right to vote is critical. Laws like the ones that have been passed in New York are meant to ensure states and localities have the flexibility and freedom to create laws and regulations that best suit the needs of their communities while protecting the safety of sensitive areas like polling locations.

LWV will continue to support laws that protect and empower Americans within both our democratic system and daily life.

LWV of Boulder County, LWV of Colorado, and LWV of the United States grieve the senseless tragedy in Boulder, Colorado, on Monday, when a man armed with an assault rifle shot and killed ten people at a grocery store.