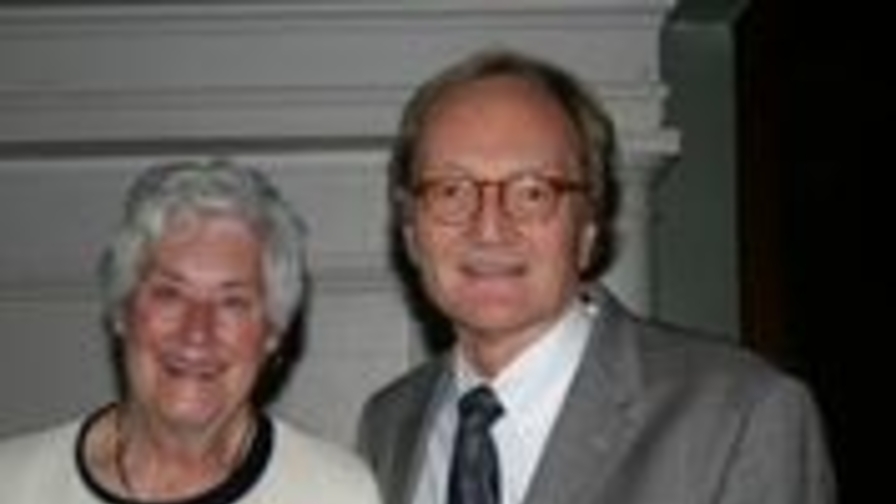 How One League Member Helped Register Over 62,000 New Citizens to Vote

Last month, League of Women Voters of Minnesota (LWVMN) member Judy Stuthman was awarded a National Association of Secretaries of State Medallion Award for her outstanding accomplishments in registering new citizens to vote.  A League member and volunteer for over 40 years, Judy led LWVMN in an effort to attend every citizenship ceremony held in Minnesota from 2007-2014, taking part in helping register over 62,000 new Americans.

The award, presented by Minnesota Secretary of State Mark Ritchie, represents Judy and LWVMN’s dedication to strengthening our democracy and our electorate. Here’s what Judy had to say about her efforts and how registering new citizens is vital to Making Democracy Work®.

Why is it important that new citizens register to vote?

Registering to vote is an important step in becoming engaged in the civic life of one's community. For new citizens, it is becoming more fully engaged in their new home. As the judges at naturalization ceremonies frequently say, "Your vote now counts just as much as mine." This is a message that resonates with new citizens, and the League being there to encourage their registration shows that we are serious in welcoming and wanting their participation. Minnesota does not have as large a number of immigrants as some states, but we do have a higher percentage of refugees among this population than other states. This is reflected in our very large Somali and Hmong populations, as well as groups from other war-torn countries. So gaining the right to vote is, for many, the first opportunity in their lifetime to help select who will lead their government.

What brought to you the League, and how did you get involved in this work?

I did work with immigrants in a church related program in the early 90s. The League of Women Voters of Minnesota began to register new citizens at naturalization ceremonies after a teacher from the Literacy Council got the idea, and called the LWVMN office to see if our non-partisan organization would help do this activity. The answer was "Yes," and we have been doing it ever since. That was in 1997. We currently attend 40-60 ceremonies a year.

I joined the League around 1970 when the environment and Earth Day were actively being discussed.

You’ve helped register over 62,000 new Americans. What are some of your favorite memories of registering new voters?

There have been so many! At one ceremony a young Somali woman came to her ceremony early with an IV inserted in her arm. The judge swore her in before the ceremony, she filled out her voter registration form and gave it to the judge, and her husband took her back to the hospital where she had had a baby just five hours before! The judge then gave the form to a League member saying he wanted to make sure it got to the right destination.

At another ceremony, a 101-year-old Hmong woman filled out her registration form, and her son told us, "She really wants to vote." At another ceremony, a young Somali woman touched my arm and said, "Thank you for helping our people." One young man came out the door after his ceremony, – he was so excited – and said to us, "Look at all the different countries these people are from. This is the greatest country in the world!" At another ceremony, the judge asked League members to stand and then said, "These folks are your true heroes. They are here as volunteers to make sure you can exercise your right to vote." And twice, we have let officials know that there was a woman in labor. They then took the woman to the judge who swore them in early so they could get to the hospital.

To see the excitement of the new citizens as they take their oath, renews League volunteers’ spirit and keeps us coming back to each ceremony. It truly is inspiring. No country is perfect, including our own, but when you are able to see the joy immigrants have for becoming citizens of America, you feel very grateful for their presence.

League of Women Voters of Minnesota

How have you helped mentor other volunteers in this work? What has it meant for you?

Basically, I send out a lot of emails! And League members, being who they are, respond with all the passion they have for our new neighbors being able to exercise their right to vote. Members know, and studies show, that civic engagement by all, benefits communities. Members [are so eager to volunteer] that I do have to turn some away, encouraging them to volunteer at some future ceremony. Most ceremonies are held in the Twin City Area, but there are also ceremonies held in greater Minnesota, providing the opportunity for our state Leagues to engage in this activity. We can cover all ceremonies, and as one member said, "This goes to the very heart of what League is about."

What are some of the ways new voters can get involved in civic life?

Different immigrant groups have become active in their own organizations that encourage civic engagement. The League of Women Voters of Minnesota has been invited to come to speak, register voters or just be a trusted presence. We do tell them to learn about the candidates and the issues before they vote; to ask questions and voice their own opinion because democracy works best when we are all involved. People from the Somali, Hmong and Latino communities have been elected to school boards, city councils and the state legislature over the past two years. It helps encourage involvement when individuals from these communities get elected to various public offices.

What have been some of the highlights of working with partners over the years?

At a large ceremony – about 1,200 – when Lee Greenwood's song "I'm Proud to be an American" was being played near the end of the event, people spontaneously stood up and began to wave their new, small American flags. There wasn't a dry eye among the 20 or so League members helping that day. We all shared something we all believe in.

Voting access remains a focus for League of Women Voters

News Clips / December 29, 2022
LWVUS Sends Memo to US House to Support the Expanding the VOTE Act