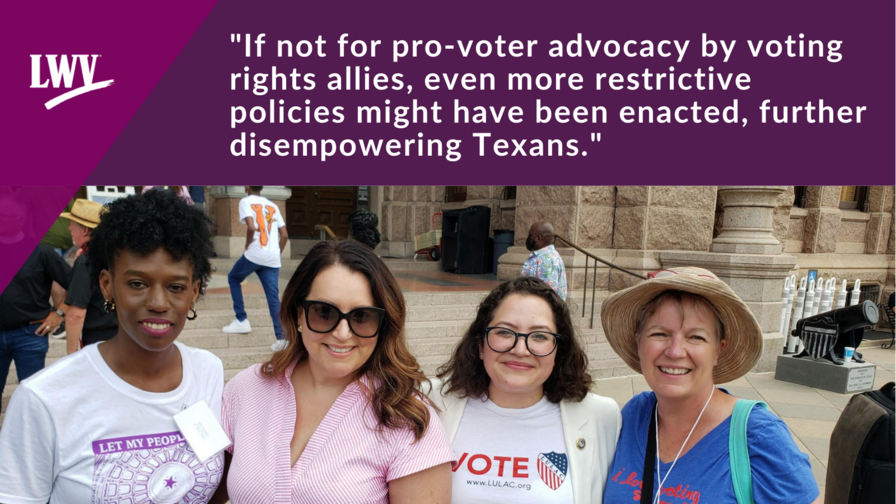 How Texas Advocates Mitigated the Attack on Voting Rights

This blog was written by Susan Schultz of the LWV of Texas.

In early September 2021, Texas Governor Greg Abbot signed Senate Bill 1 (SB1) into law. This anti-voter legislation is an omnibus bill that makes it incredibly challenging for certain voters, including those with disabilities and those whose primary language isn’t English, to cast their ballots.

SB1 is an assault on our democracy and an enormous blow to voters across Texas. Yet shockingly, the situation could have been worse.

If not for pro-voter advocacy by the Texas League and other voting rights allies, even more restrictive policies might have been enacted, further disempowering Texans and degrading the promise of democracy.

The 2021 Attack on Texas Voters

Although research indicates that the 2020 Election was securely executed, Governor Abbott responded to misleading concerns over “election integrity” by declaring it one of his priorities for the regular legislative session. Texas legislative leaders followed his lead and filed 400 bills relating to voting rights and elections.  Most of the bills were aimed at restricting voters’ rights, especially those of voters with disabilities, older voters, urban voters, and voters of color.

These anti-voter provisions culminated during the regular session in two omnibus bills: one in the Texas Senate (SB7) and one in the state House (HB6). Some of the most egregious provisions would have: 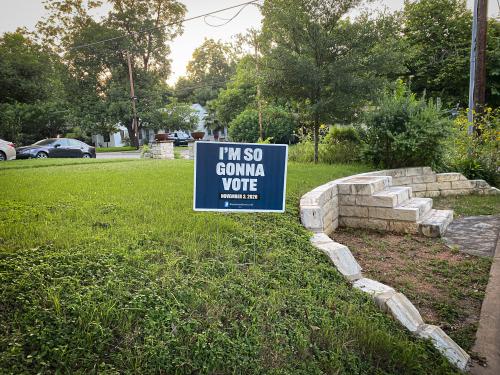 During the regular session, these omnibus bills were rushed through, with committee chairs holding marathon hearings through the night and limiting public testimony to two or three minutes. Mask mandates in committee rooms were only occasionally enforced, threatening the health of the witnesses and greatly reducing the amount of people who would otherwise have testified.

In response, the Texas League drafted testimony against the bills and represented the League before the committees. The League also worked with partner organizations to strategize and put together talking points to empower members and the general public. Through Action Alerts on the Texas League’s website, League members and supporters were able to contact their legislators about these bills and write letters to the editor.

Ultimately, the omnibus bills failed to get a final vote in the regular session because some legislators took what they considered the only option available to stop them: breaking quorum and leaving the Capitol.

Undeterred, the Governor called a first special session with the same, single-minded goal of limiting certain Texans’ freedom to vote and complicating the election process. Another election omnibus bill was filed at the beginning of the special session, tracking very closely with the bills from the regular session. Other marathon committee hearings were scheduled, and some legislators realized that true deliberation and negotiation would not take place. Again, they broke quorum, but this time with the purpose of going to Washington, DC, to support federal legislation that seeks to instill voting rights for all.

When the first special legislative session ended, the governor called another one.  When quorum was reestablished during this second special session, the majority in both the Texas House and Senate quickly enacted the election omnibus bill SB1 in place of the original provisions proposed in HB6 or SB7.

In response, the Texas League drafted testimony against the bills and represented the League before the committees. The League also worked with partner organizations to strategize and put together talking points to empower members and the general public.

SB1: A Deeply Flawed Improvement on Prior Bills

While SB1 still restricts voting rights and violates Americans’ freedom to vote, the worst provisions of HB6 and SB7  were avoided because of the effective advocacy from League members and other individuals and organizations. Some gains were also included in SB 1, such as:

That said, we are not sitting idly by and allowing the anti-voter policies of SB1 to go unchallenged. On September 3, the League of Women Voters of Texas and partner civil rights organizations filed a lawsuit against the state of Texas over SB1. A few small improvements to the previous omnibus bills are simply not sufficient when SB1 threatens the rights of millions of disabled, language-minority, and Black and brown Americans.

The League will continue to fight for all Texas voters by reviewing the changes to the election code and empowering  voters with the information they need to cast a ballot and vote in every election. We are grateful to have our members and partner organizations with us in this fight.

We might be exhausted, frustrated, and disappointed; yet the League is committed to continuing its work on behalf of every Texas voter. You can join us! Texans can take action through our League website, and those outside the state can find pro-voter initiatives through their local Leagues.

Even in these difficult times, our work made a difference. We will continue to do so together.

LWV of Texas filed a lawsuit against the state of Texas, challenging Senate Bill 1, an omnibus anti-voter bill expected to be signed into law by Governor Greg Abbott.

The League of Women Voters of Texas filed an amicus curiae in In Re Chris Turner, et al. asking the Texas Supreme Court to void the Governor’s veto, highlighting the impact of Governor Abbott's veto of the legislative budget.