This post was contributed by Anne Anderson, Chair, LWVDC Committee for Full Rights for DC Citizens.

September 19th dawned crisp and bright as DC citizens streamed into the Rayburn HOB to be present at the hearing conducted by the House Oversight and Reform Committee.  The halls rapidly filled, the 2 overflow rooms filled, and then people went on over to the Spirit of Justice Park, just south of Rayburn, to join their fellow statehood supporters to watch the hearing on a big screen. 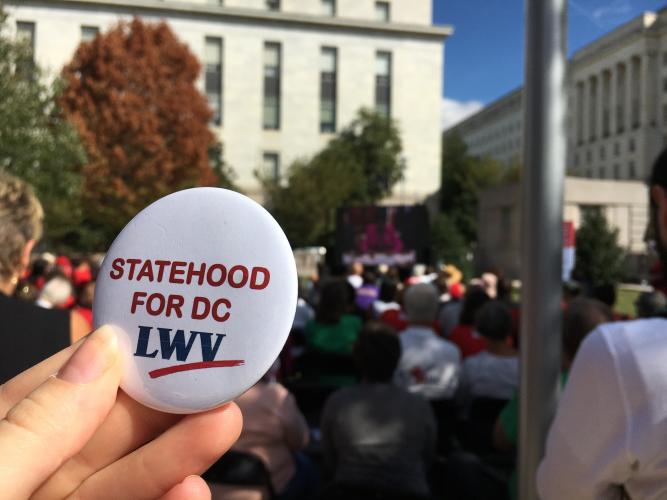 This hearing was the first one held by the House in 26 years to consider the issue of admitting the residential and commercial parts of the District of Columbia as a new state—leaving a smaller District of Columbia intact that surrounds the federal buildings such as the Capitol, Supreme Court, White House, Senate and House office Buildings, and the monuments on the national mall.  By keeping a smaller federal district, the bill maintains the constitutionally required federal seat of government and fully enfranchises the 700,000+ people who currently live in DC by admitting the state of Washington, Douglass Commonwealth (named for Frederick Douglass, a long-time resident of DC and fierce civil rights advocate).

Currently, DC is ultimately controlled by Congress because of the “District Clause” in the Constitution that declares in Article 1, Section 8, Clause 17 that Congress will: …exercise exclusive legislative jurisdiction in all cases whatsoever, over such district (not exceeding ten miles square) as may, by cession of particular states, and the acceptance of Congress, become the seat of the government of the United States…  When Congress moved to the District in 1801 and passed the Organic Act, DC residents became disenfranchised, having no representation in the national legislature and no local governance, a long-term example of voter suppression.  H.R. 51 would admit the new state, bringing fully equal citizenship to DC residents since they would then be entitled to 2 senators and as many representatives as their population requires.  A previous attempt in 1993 was defeated on the House floor, 277-153.

This latest effort to gain statehood for the people of DC officially began in 2016 with the passage of a referendum (86% voted yes) by DC citizens that ratified a state constitution, agreed to state boundaries and a republican representative form of government, and authorized the Mayor to petition Congress for statehood.  In this Congress, H.R. 51 at this writing has 221 co-sponsors, enough to pass by co-sponsor votes alone.  160+ national organizations have endorsed the bill, including LWVUS.  There is also a companion bill in the Senate (S. 631), sponsored by Thomas Carper (D-DE) with 34 co-sponsors.

Mr. Thomas from the Congressional Research Service outlined three parts of the Constitution that are involved:  The Admission Clause, the District Clause and the 23rd Amendment.

Mr. Pilon, the minority witness in opposition, opened his presentation by noting that the bill would not be going anywhere because of the Republican-held Senate.  His main point was that making DC a state would require a constitutional amendment because the founding fathers included the federal district in the Constitution as a special enclave.  So, because it is in a special category, it could not be addressed through the Admissions Clause because that is about territories.

Further opposition was expressed by the Republican members of the Committee, although no one disputed any of the presentations of the witnesses advocating for statehood. Instead, they focused on the following themes:

The discussion of the issues among the Committee members revolved around advocates responding to points the opposition had made:

The next steps for H.R. 51, The Washington DC Admission Act (DC stands for Douglass Commonwealth) will be a mark-up session in committee, and a committee vote on the bill.  It is expected to pass the committee to be sent to the House floor for a vote sometime in 2020.

This legislation is a historic opportunity to ensure that DC residents are no longer disenfranchised. Stand with the residents of DC and sign our petition to support DC Statehood.