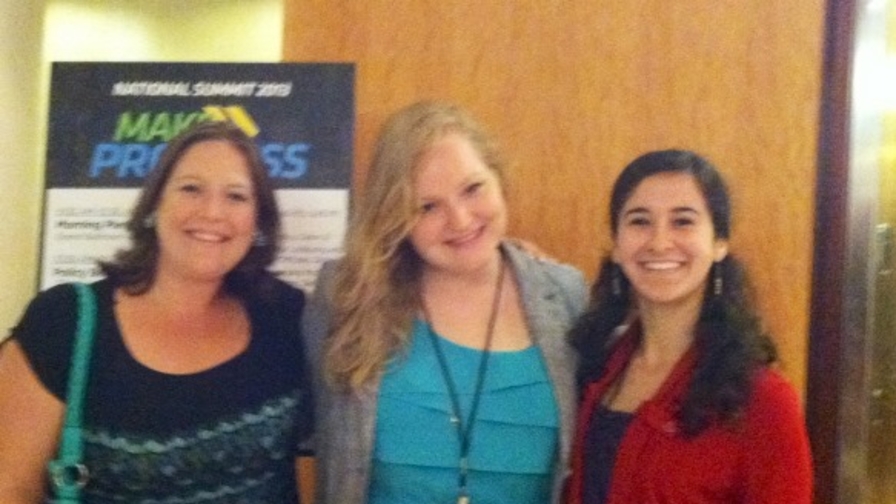 EDITORIAL NOTE: This blog post was written by our interns Clara Roberts and Sophie Tarazi

“When you’re talking about changing the world, you don’t need permission and no one will tell you how to do it.” That was the message of the Make Progress national summit, hosted by Generation Progress and held just blocks from The White House on Wednesday. More than 900 students and young professionals gathered to rally for social change and to learn skills for effectively engaging young voters in our democracy. We attended the conference along with the League’s elections manager Maggie Duncan to connect with partners and hone strategies for keeping the League at the forefront of policy action.

In addition to attending plenary sessions featuring speakers from the world of politics and policy, conference attendees participated in training sessions geared at addressing important issues such as voting rights, immigration, environmental conservation and equal representation. Also in the forefront of the minds of many was the need to register and educate millions of young voters so that their critical voices can be heard on the challenges facing our nation. The crowd cheered when asked whether they would be participating in National Voter Registration Day 2013, a program that more than 140 Leagues have already signed on to participate in again this year.

During a panel on the negative impact of recent voter suppression tactics, a panelist noted that “a [photo] voter ID bill is still a modern day poll tax.” Panelists expressed disappointment in the outcome of the Voting Rights Act Supreme Court case, but also hope that with targeted efforts, those committed to protecting voting rights will be successful in fighting back against laws that seek to limit access to the vote. At a panel on immigration, panelists, some of whom are living undocumented in the United States, shared their own inspiring stories about immigration and the trials of crossing a border. They also emphasized the need for comprehensive immigration reform, a legislative stance for which the League advocates.

After lunch, conference attendees split into small groups to discuss their values and policy goals, with the idea that “policy is a bridge between the things we believe and the world we want to see created.” Among the most important values spurring policy action were equal access to rights for people of all backgrounds and the importance of diversity, both cornerstones of the League’s High School Voter Registration project and other efforts.

The day’s events were geared at training a new generation of activists to tackle the issues of our time. As one speaker put it, “Every generation has a mission; you can either fulfill it, or you can betray it.” Not only did the Generation Progress National Summit give hundreds of rising millennial leaders the opportunity to discuss and debate current issues, but it provided them with the foundation for how to turn their passion into policy.

As keynote speaker Senator Tammy Baldwin shared, “I will not accept that progress is beyond our reach. There is simply too much at stake for so many. We need to put progress before politics and work together to move America forward.” Conference attendees and League members alike agree that now is the time to take action on vital policies for improving our democracy.