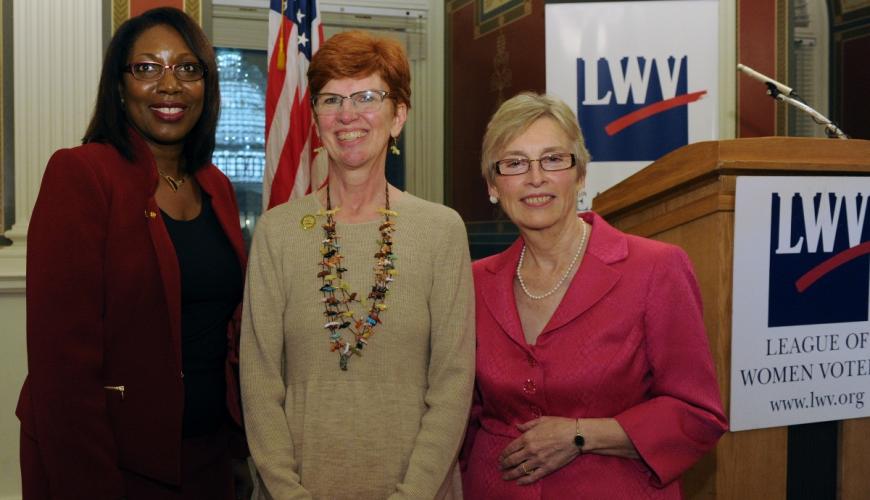 On Tuesday, we brought together supporters, policymakers and members of the media to introduce Dr. Wylecia Wiggs Harris as our newest executive director and to bid a fond farewell to our previous executive director, Nancy Tate who led the League for 15 years.

I was honored to stand by Wylecia’s side as she introduced herself to our friends and supporters. While reflecting upon the League’s storied past, Wylecia also laid out her vision for the League’s future and our second century:

One cannot step into this position without an appreciation, a respect and a reverence for those who have come before me. They are the giants upon whose shoulders I now stand. It is because of them, because of their legacy, that I am able to see our future.

We are an organization with a formidable history, and I am honored to be the keeper of that legacy as we move into our next hundred years.

That vision and path for change starts with next year’s election. In my remarks, I outlined how the 2016 election will be the most important in a generation: the next president will likely choose one or more new U.S. Supreme Court Justices and we know the court will have a huge impact on issues critical to the League, such as campaign finance reform and voting rights.

It will be the first federal election without the full protections of the Voting Rights Act of 1965, meaning the risk of voters being disenfranchised by anti-voter laws is the highest it has been since the days of Jim Crow.

It will also be the most expensive presidential election in history. Hundreds of millions of dollars have already been poured into the election, and we still have a year to go! What’s worse, the majority of the money is coming from a tiny group—a mere 159 families are behind $176 million in contributions.

The League of Women Voters is the only organization with the expertise and grassroots network to make sure that the 2016 election is decided by the voters, not deep-pocketed special interests.

These goals are inextricably linked. We can register new voters, but unless we empower them with information and ask them to vote, we’re going to have trouble getting them to the polls on Election Day. And if we get them to the polls on Election Day, and they have a bad experience—because their polling place has moved or their identity is questioned or the machines are broken so they have to vote provisionally, we’re going to have a harder time getting that voter to come back next time.

Growing the vote is the greatest weapon we have if we want to combat the influence of money in politics. It’s how we take the power from the few and put it back in the hands of the many – each voter who shows up at the polls diminishes the influence of every dollar spent trying to swing an election.

I won’t pretend that the fight will be easy, but together we can succeed. In fact, the only remedy for the flood of money in our elections is a flood of voters at the polls.

As Wylecia said, “The League’s perspective is as relevant as it ever has been. Voters today don’t need less education. Election officials don’t need fewer partners. Our democracy doesn’t need fewer advocates.” Under Wylecia’s leadership and commitment to keep the League of Women Voters as a defender of democracy for the next 95 years, I know we can create a democracy where all voters have reliable information and easy access to the polls. A democracy where politicians are held accountable to voters, not campaign donors. A democracy where our public policies reflect the will of everyone in our communities.

The League was cited in a ruling to extend voter registration an additional week in the aftermath of Hurricane Matthew.