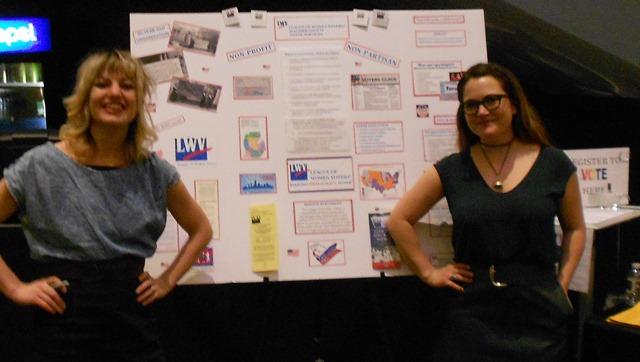 The League team is taking a moment to reflect on this spring’s “Use Your Voice” tour, carried out by Grammy award-winning artists Patty Griffin and Sara Watkins, rising star Anais Mitchell, and nearly 40 local League volunteer teams nationwide. The idea for the tour sprung from the artists’ desire to use their megaphone to encourage and equip every one of their fans to vote in the 2016 elections.

From February through April, hundreds of League volunteers attended the artists’ unique “in-the-round” performances in 39 cities nationwide. Each evening, League leaders took to the stage to talk up the importance of voting this year, staffed tables stocked with helpful voting information, and interacted with attendees before, during and after the performances.

As one of our North Carolina League leaders said, “The opportunity to talk about the importance of the upcoming election - particularly in light of the recent and significant changes to our voter laws - was outstanding…standing at the front of the stage with hundreds of attendees…was unparalleled. The concert itself - just wonderful - was poetry set to music. What an absolute pleasure.”

Overall, League representatives spoke directly to tens of thousands of voters through the tour and personally assisted thousands of individuals by helping them register to vote, update their voter registration, or find answers to other voting-related questions. Participating Leagues strived to provide sought-after localized information about upcoming elections and worked to demystify oft-misunderstood rules for participating in presidential and other primary elections. On a nightly basis, each of the artists also spoke eloquently about their personal connection to democracy and urged fans to participate in this year’s elections.

The message of the tour was not just heard by concert attendees; Patty Griffin, Sara Watkins, Anais Mitchell and League volunteers used their far-reaching social platforms and reached out to local and national media to encourage followers to cast a vote this year. In the end, more than 30 news stories highlighted the tour, offered up the artists’ thoughts about the importance of voting, and directed readers to helpful League resources.

The long-term effects of this partnership will continue to be felt for a long time to come. Leagues have shared a wide range of plans for how they intend to utilize the support from the artists to engage voters this year, including visiting high schools and community colleges to conduct voter registration, printing thousands of nonpartisan voter education materials to be distributed in low-voter turnout neighborhoods, and sponsoring events such as candidate debates and forums.

As one League leader said, “This was a great opportunity for our League. Many thanks to Patty Griffin, Sara Watkins and Anais Mitchell for their efforts to call attention to the importance of each and every vote.”