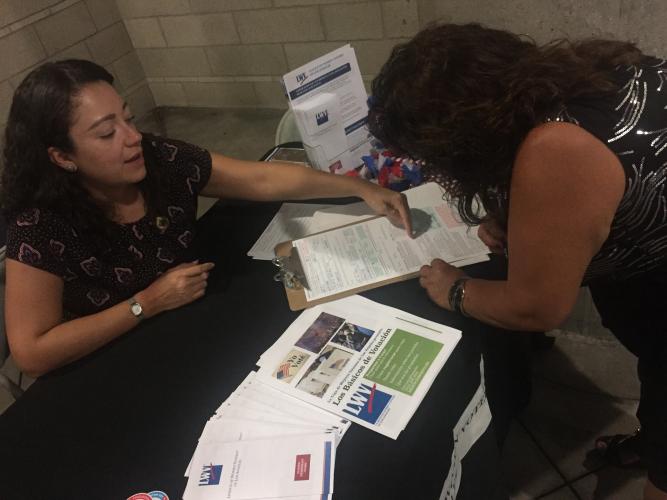 For many years, League of Women Voters volunteers have been a fixture at these ceremonies in local communities, working closely with local immigration officials to provide on-the-spot voter registration assistance for the new citizens, providing nonpartisan voter education materials, and answering questions about how new Americans can get involved in civic life. Many state and local League affiliates have worked for decades to offer voter registration at naturalization ceremonies, with some Leagues reporting tens of thousands of new citizens registered as a result of their volunteers’ diligent work.

In the spring of 2016, the League of Women Voters Education Fund launched a program to support these volunteer-driven efforts in fourteen communities nationwide. From Houston to Atlanta, Upstate New York to South Carolina, 500+ League volunteers attended more than 220 naturalization ceremonies, interacting with tens of thousands of brand-new citizens.

In the end, participating League volunteers helped nearly 19,000 new Americans complete voter registration applications on the spot. Later, League teams followed up with the new citizens to provide additional get-out-the-vote assistance and ensure they had successfully made it onto voter registration rolls. All participating League teams report that they will continue their work in an effort to engage even more new Americans in 2017.

Nationwide, the League works to empower voters of all backgrounds to get involved in voting and democracy. From providing critical voter registration opportunities to new citizens, high school students and other likely underrepresented groups in our electorate, to directly equipping millions of voters with localized election information through our award-winning www.VOTE411.org and hosting hundreds of candidate debates and forums each year, the League of Women Voters is at the forefront of Making Democracy Work™. Join us at www.lwv.org.