Hopes of a New Era of Progress, Peace, Prosperity, and Unity

Ahead of the Inauguration, the League of Women Voters of the United States sent a letter to President Biden and the Transition Team, congratulating them on their victory and outlining the ways in which the League hopes to work together with the new administration to advance our democracy towards a brighter future for all. After a challenging year exacerbated by COVID-19 and deadlock in the US Congress, our democracy faced many trials but stood firm. Despite a global pandemic and expansive civil unrest, more voters turned out to vote than ever before in U.S. history. Now, in 2021, a new year also ushers in a new era. At the League, it is our hope that we will be able to work in step with the current administration to achieve these initiatives, outlined as follows. Below are the LWV priorities aimed at working toward a better democracy, together.

1. PASS THE FOR THE PEOPLE ACT

Restoring the Voting Rights Act will strengthen our elections by eliminating obstructive laws that have kept eligible voters of color from exercising their constitutional right at the ballot box. Since the Supreme Court’s Shelby County v. Holder decision rolled back key provisions of the Voting Rights Act in 2013, we have seen the process of voting become more challenging, especially for women and communities of color. In recent elections, voters have faced a variety of obstacles, from reduced polling locations that lead to long lines and stringent voter identification requirements, to the illegal removal of registered voters from the polls and restrictions that limit voters’ options when it comes to how they cast their ballot. As you are aware, the Voting Rights Act was created to ensure that every American has an equal right to vote. H.R. 1 includes provisions for restoring these aspects of the VRA to strengthen voting rights and protect all eligible Americans at the ballot box. Additionally, a bill that focuses solely on restoring the VRA, the John R. Lewis Voting Rights Advancement Act, was introduced last year. Should the bill be introduced in the 117th Congress, we ask the Biden Administration to prioritize passage of the John R. Lewis Voting Rights Advancement Act. 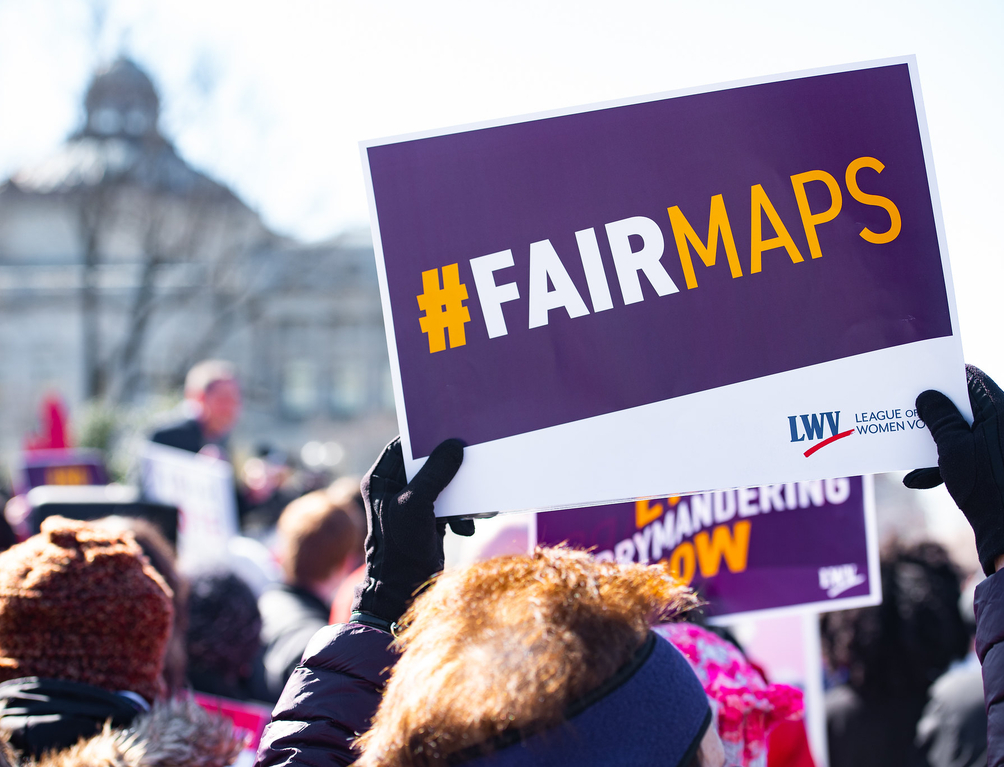 Ending gerrymandering once and for all means that voters select their elected officials — not the other way around. Additionally, without passage of the John R. Lewis Voting Rights Act, 2021 will be the first redistricting cycle conducted without the full protections of the Voting Rights Act. Across the country, in legislatures, in court, and on the ballot, the League has fought efforts of politicians from both major parties to draw unfair election maps that keep power in their own hands. Gerrymandering silences voters and residents of disputed districts, who, instead of electing officials to represent their interests, are selected by the politicians working to serve themselves. H.R. 1 establishes clear rules around state redistricting processes so that maps can be drawn fairly. These provisions, combined with the passage of the John R. Lewis Voting Rights Advancement Act, will ensure fair and equal representation for all people across the country.

4. ENSURE EQUAL RIGHTS FOR ALL

Pushing the Equal Rights Amendment over the finish line is critical at this time. The required 38 states have ratified the amendment, and it is time for the National Archivist to proceed with the certification. The addition of the Equal Rights Amendment to the constitution would address the root cause of inequality by amending our Constitution. The League is an organization that was born out of the movement to secure voting rights for women. We have continued to fight for equal rights and equal opportunities for all. Despite the significant progress that women have made towards equality over the years, women still face systematic discrimination in the form of unequal pay, workplace harassment, domestic violence, and prejudice against victims of sexual assault and trafficking. We are asking the Biden administration to direct the National Archivist to ratify the 28th Amendment immediately. In addition, legislation has been introduced in Congress to eliminate the ambiguity of the timeline placed on the amendment in the 80s. We ask the administration to support the passage of this legislation so that the ERA can be added to the Constitution without issue.

Monumental reform is needed following the Trump administration’s cruel actions towards immigrants, asylum seekers, and mixed-status families. The League thanks President-elect Biden for following through on his commitment to immediately rescind the Muslim and African Bans, as well as numerous other executive orders that harm the immigrant community. It is also critical that a permanent path to citizenship is implemented and steps are taken to reduce the detention of immigrants as soon as possible. While the COVID-19 pandemic continues to harm immigrant families, many of whom are frontline workers, it is important that vaccine distribution and economic support be accessible to all, regardless of immigration status. It is also imperative that we prioritize those communities impacted most.

For over a decade, the League has supported a clean DREAM Act, the reunification of families, the admission of refugees and asylum seekers, and an expeditious immigration system with minimal visa backlogs. In the last four years, we have opposed the repeal of Deferred Action for Childhood Arrivals (DACA), the proposed Securing America’s Future Act of 2018, the prior administration’s horrific separation of families at the border, and the Public Charge rule. Protecting the basic human rights of immigrants is critical to our mission and to the nation’s promise of equality for all.

Rising to the challenge and meeting the threats posed by climate change is especially important to avoid the negative impact on the most vulnerable Americans. Climate has been elevated as one of the administration’s top four priorities. Tackling this priority requires an ambitious and comprehensive reduction of domestic emissions, rejoining international environmental pacts, and critical resilience building in communities most likely to be affected by natural disasters and industrial transition. 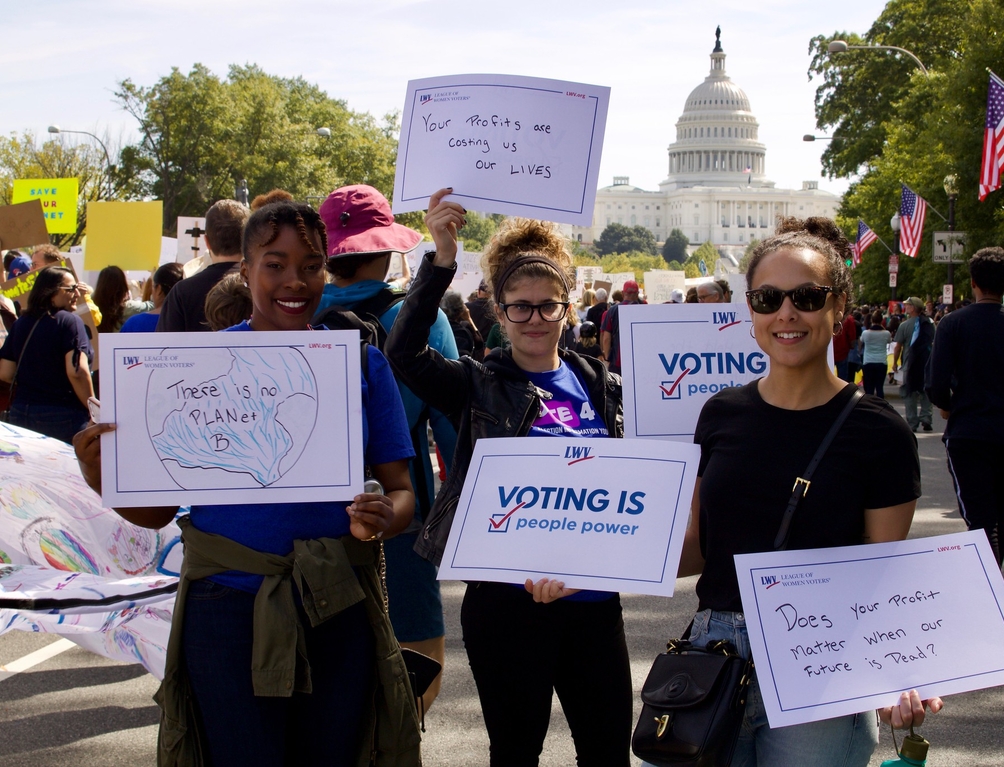 Since the late 2000s, LWV has fervently advocated for a coordinated government response to global climate change. We have long lobbied for caps on pollution, investments in renewable energy, carbon pricing, and stronger EPA regulations on methane and other gases. More recently, the League has expanded our work to focus on climate justice: the impacts of climate change on younger generations, indigenous communities and people of color, working-class neighborhoods, and families in economic transition. We have strongly opposed the approval of the Keystone XL pipeline and joined litigation in support of the plaintiffs in Juliana v. U.S., a lawsuit by young people against the Trump administration for the government’s policies which accelerate climate change and violate the youngest generation’s right to life and liberty. These policies fail to protect essential public interest resources.

The U.S. health care system should provide a basic level of quality health care at an affordable cost to all U.S. residents. Basic care includes disease prevention, primary care (including prenatal and reproductive health), acute long-term care, and mental health care, as well as health promotion and education. Health care policy goals should include the equitable distribution of services and delivery of care, as well as the advancement of medical research and technology, all at a reasonable total national expenditure level. The Leagues works to provide millions of Americans across the country with objective information about the health care system and its significant reforms. This includes organizing community education projects, holding public forums and debates, creating and distributing resource materials, and engaging leading policy makers and analysts. We are asking the Biden administration to protect the Affordable Care Act and work to strengthen the law against future attacks.

Adopting legislation that will close the gun show loophole, provide universal background checks, increase penalties for straw purchases of guns, ban assault weapons, place limits on high-capacity ammunition magazine size, as well as fund research and reporting on gun violence in America is vital. The nation needs and demands comprehensive gun reform, including placing limits on magazine size, as a common-sense solution to reduce shootings that risk countless lives. These measures should include placing limits on magazines and other ammunition feeding devices that hold more than ten rounds of ammunition. These devices allow shooters to fire numerous rounds in rapid succession without having to reload ammunition, making them a central factor in the mass killings at schools and public meeting places. In addition, background checks are not required for the 40% of gun sales that take place at gun shows, person-to-person sales, or other private transactions. A recent Quinnipiac poll found that support for background checks is almost universal with 97% of voters in favor of background checks on all gun purchasers. This is the highest level of support ever measured by the independent poll.

The League was a founding member of the United Nations in 1945, and today we continue our work with the UN as official observers. By working collaboratively and focusing on issues of common priorities, the League of Women Voters will readily support the Biden administration to advance the goals of the United States at the United Nations. Through our work on various coalitions and by interventions, the Leagues is working to eliminate human trafficking by focusing on the demand side of the equation in an effort to bankrupt this $150 billion illicit industry. We are encouraging our 500,000+ activists to “think globally and act locally” regarding implementation of the Sustainable Development Goals (SDGs), including strong democratic institutions (#16), climate action (#13), improved healthcare (#3), women’s equality (#5), education (#4), and decent work and economic growth (#8). The Biden administration should restore the United States’ standing at the UN by re-entering the Paris Agreement on Climate (including increasing the U.S. emission reduction ambitions and agreeing to Article 6 on carbon markets), halting the withdrawal from the World Health Organization (WHO) — which is set to be complete by July 2021, reapplying to the Human Rights Council, and resuming active engagement with civil society.

We stand by ready to offer our support in examining the impact of systemic racism on how the government serves the American people. The League of Women Voters membership recently affirmed and elevated our commitment to Diversity, Equity, and Inclusion, and we ask the Biden administration to ensure that each agency across the entire government be held to a similar standard.

The League looks forward to working with the Biden administration to consider these nine priorities of the League of Women Voters of the United States to achieve our common goals in the years ahead.