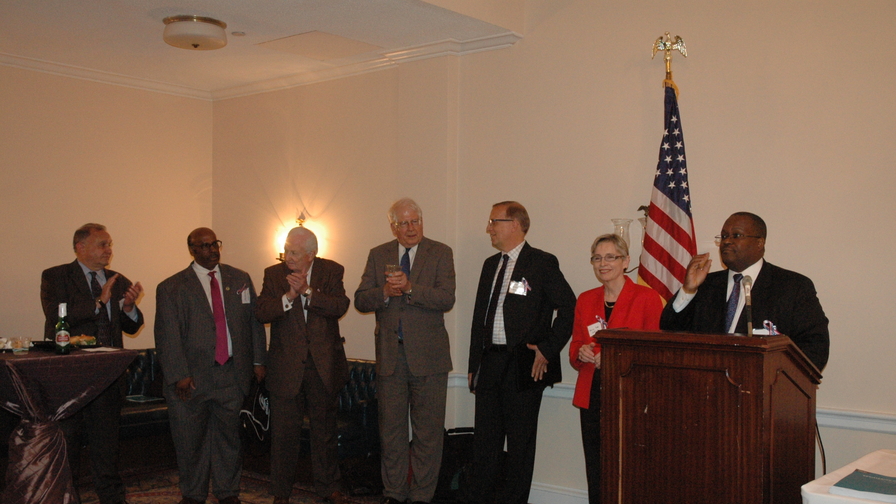 On Monday, the League was proud to celebrate the 20th anniversary of the National Voter Registration Act (NVRA) by visiting the U.S. Capitol to attend briefings and a celebratory reception on the monumental voting rights law. It also gave us an opportunity to reunite with our fellow “Motor Voter” coalition members who joined us in the fight for this critical legislation.

The League helped found the Motor Voter coalition in the late 1980s in an effort to streamline confusing state laws and make the voter registration process more accessible to all Americans, including the elderly, minorities, people with disabilities and low-income individuals. Monday’s events brought together many of the more than 60 groups that composed the Motor Voter coalition. We were pleased to hear from both the ACLU and the NAACP National Voter Fund, which at different times served as coalition co-chairs alongside the League.

Along with the League’s Executive Director, Nancy Tate, speakers from Rock the Vote, the National Coalition on Black Civic Participation, Lawyers Committee for Civil Rights Under Law, the Advancement Project, the Leadership Conference Education Fund and more recalled the hard work and sleepless nights – including the many overnights spent at the Capitol – that advocates endured in their fight to pass legislation to make the vote more accessible. Former Representative Al Swift, who sponsored the NVRA, and Dr. Francis Fox-Piven, co-founder of Human SERVE/100% VOTE, shared heartfelt memories of their hours spent lobbying Congress and underscored the importance of the NVRA in making the voter registration process accessible to all Americans.

Throughout the day’s events, coalition members shared the message that the occasion of the NVRA’s 20th birthday brought many reasons to celebrate. According to a new report from Demos, the NVRA has helped register millions of eligible Americans and narrow the voter registration gap among people of different incomes. At the same time, however, only 1 in 4 eligible Americans are registered to vote. As we mark this milestone for NVRA, it is important to remember that we still need this legislation to help us to educate and register voters – which the League does tirelessly through efforts like citizen-led voter registration drives and VOTE411 – and continue our ongoing work to make the vote free, fair and accessible to all.