One of the first acts of patriotism as a new citizen: registering to vote

Exactly one week after the election, I had the privilege of joining fellow members of the League of Women Voters of DC to register new voters at a naturalization ceremony. I had never been to a naturalization ceremony and was uncertain what to expect. The U.S. District Court for DC hosts naturalization ceremonies approximately once a month, and, given this frequency, I imagined the ceremony would feel routine and bland— something like a trip to the DMV with lots of paperwork and waiting around for names to be called. I was absolutely wrong.

What I witnessed was an hour of joy, celebration, relief, and honor as 126 applicants from over 40 countries took their oath to become naturalized American citizens. 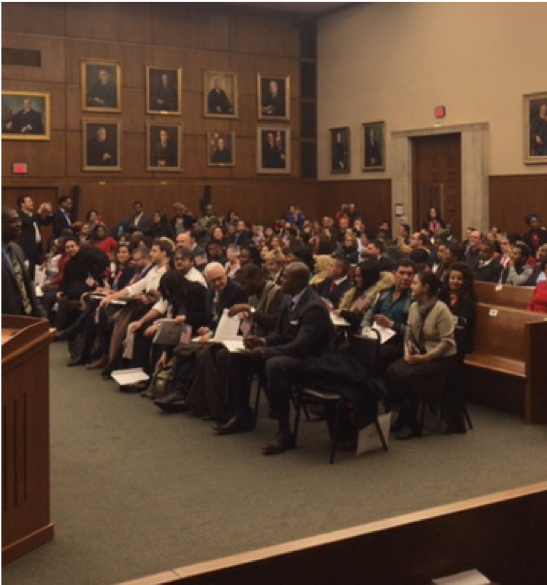 As a nonpartisan organization, the League of Women Voters is one of the only voter registration groups allowed entry into naturalization ceremonies nationwide. It is a distinction that League members take seriously, and something that I am proud to help promote and support through my role as an organizer on the national staff. In 2018 alone, Leagues nationwide attended an estimated 600+ ceremonies to offer voter registration.

At the beginning of our ceremony, the DC League President was granted time to speak about voting and the role of the League volunteers who were in the courtroom. Once the ceremony ended, Leaguers jumped to attention and worked with excited new citizens as they filled out their voter registration forms.

As this was my first time at a naturalization ceremony registering voters, I leaned heavily on the expertise of the other League members. I was nervous that we were going to have to vie for the attention of the new citizens, explain why registering to vote was significant, and convince them to fill out their registration form. I made this assumption, in part, because I have had the privilege of being an American citizen my entire life. It was not until I was out of college that I understood the significance of the power of my vote. Most of the individuals I encountered have been residing in the United States without a right to vote for years—subject to the laws and representation without any way to contribute to the system of democratic change. They were eager to make their voice heard through voting, and I was eager to help.

The key to a strong democracy is an expanded American electorate that reflects the diversity of our communities, and we are excited to be able to give new citizens the tools to become engaged voters. The DC League makes an effort to attend the monthly naturalization ceremony and is always happy to have more volunteers on hand! Want to get involved? Find a League in your area and ask them about volunteer opportunities!

Voting access remains a focus for League of Women Voters

News Clips / December 29, 2022
LWVUS Sends Memo to US House to Support the Expanding the VOTE Act