One Year After Shelby Decision, The Fight Continues to Protect Equal Access to the Vote 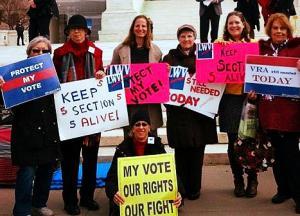 This week marks one year since the U.S. Supreme Court struck a major blow to our democracy. In its ruling in Shelby County, Alabama v. Holder last June, the Supreme Court struck down a vital part of the landmark Voting Rights Act (VRA) of 1965, letting discrimination tighten its grip at the ballot box. As a result, state after state has sought to implement discriminatory voting measures over the past year. From moving polling locations in areas with high populations of minority voters to instating strict voter ID laws and slashing early voting periods, Americans across the country continue to face new restrictions on their right to vote.

Luckily, there's a solution. The bipartisan Voting Rights Amendment Act(VRAA), is a flexible, modern answer to the problem of discrimination in voting.