A Panel Discussion on Violence Against Women Politicians

This blog post was written by LWVUS's Chief Observer to the United Nations, Rosalee Keech.

Simply put, threats against women in politics (at any level) is a threat to silence all of us.  As Dr. Dubravka Šimonovic, United Nations Special Rapporteur on violence against women, said:

Make no mistake: this is gender-based violence, and its goal is stopping not just the individuals specifically targeted, but all women from expressing their political voice and agency.

This sentence has propelled many of us in the UN community to action.  Combined with countless stories from women who are serving in parliaments around the world about the harassment, threats, and acts of violence by some colleagues as well as by some members of the public, motivated the Inter-Parliamentary Union (IPU) to conduct studies regarding the phenomenon.  According to their 2016 global survey of women parliamentarians, 82% of the respondents had experienced psychological violence. Among them, some 44% had received threats of death, rape, beatings, or abduction during their parliamentary terms, including threats to kidnap or kill their children.

Sitting on the sidelines and remaining silent is not something I do very well, especially when I think it goes to the heart of our democracy.  So, in my role as LWVUS Chief Observer to the United Nations, I engaged with the IPU to bring a panel of expert women parliamentarians to discuss not only the phenomenon itself, but what is being done to combat the phenomenon in other countries.  With the help of the LWVUS staff and made possible by the sponsorship of Representatives Jackie Speier, Debbie Lesko, and Dan Kildee, we were able to bring the panel discussion to the US House of Representatives on September 19, 2019. 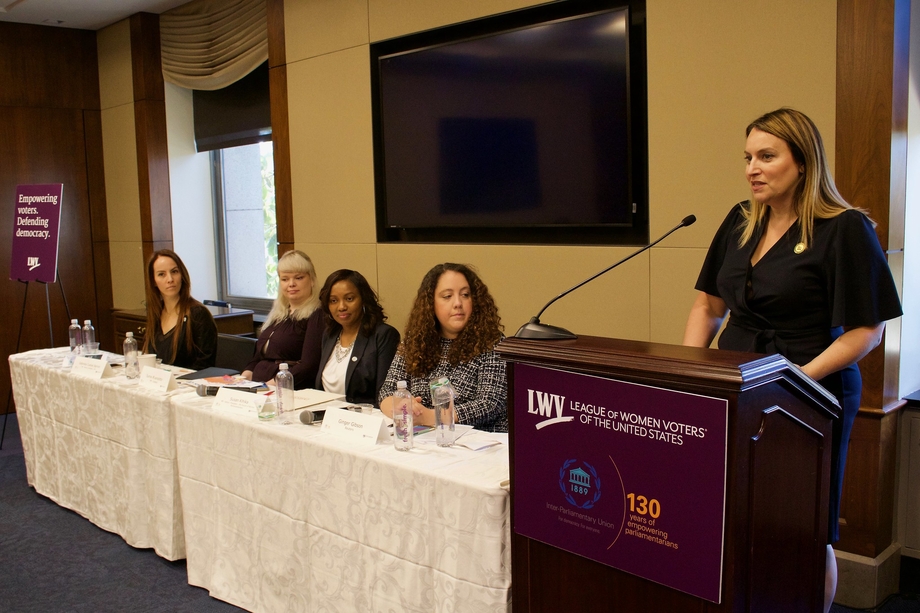 Panelist Hon. Gabriela Cuevas Barron (President of the IPU and MP Mexico) relayed a personal story regarding her first year in the Parliament at the age of 21 and how one of her colleagues tried to get her into his hotel room. She was also able to relay how these types of encounters have encouraged the passing of laws in Mexico and other parliaments. The Hon. Sunna Aevarsdottir (Rapporteur for the Parliamentary Assembly of the Council of Europe and MP Iceland) talked about preventive measures, including the importance of codes of conduct for Parliamentarians and their staffs as demonstrating commitments.  And Senator Susan Kihika (President IPU Bureau of Women Parliamentarians and Majority Whip of Kenya Senate) discussed the importance of taking the reports of sexual harassment seriously.

We also heard from Representatives Barbara Lee, Debbie Lesko, and Bonnie Watson Coleman, each relaying their commitment to addressing the phenomenon—including strengthening the existing law (sponsored by Rep. Jackie Speier) passed in December 2018 that, among other things, calls for an end to taxpayer dollars used to settle sexual harassment claims perpetrated by members of Congress and/or their staff.

There are three major points that I’ve learned at the UN over the years:  1) Harassment leads to threats and then to violence, if gone unchecked.  2) When harassment is done by those in power, it gives a green light for violence to ensue. 3) Sitting on the sidelines and being silent leads to continuing violence.

For me, this panel discussion clarified that we all can insist that our political leaders adhere to civil discourse by only allowing our precious votes to go to those who do not harass opponents and others.

Watch a video of the panel discussion below: