This guest blog post was contributed by Bonnie Miller, president of LWV of Arkansas.

According to a USC study, Arkansas is the 8th most gerrymandered state in regards to our state legislative districts. Remedying this problem is clearly a nonpartisan issue, and the League of Women Voters of Arkansas have been able to garner bipartisan support from state legislators as well as other organizations throughout the state.

Like many other state Leagues, the League of Women Voters of Arkansas (LWVAR) has been working hard for many years on redistricting reform. The national launch of the People Powered Fair MapsTM (PPFM) last summer was a rallying call to unify and consolidate our efforts around this issue. Two members from our state League attended the national PPFM convening last October and returned ready to organize and start our state’s campaign. We spent several months assembling a campaign team, working with attorneys to draft petition language, building a website, and conducting town halls to educate Arkansans about the dangers of gerrymandering. 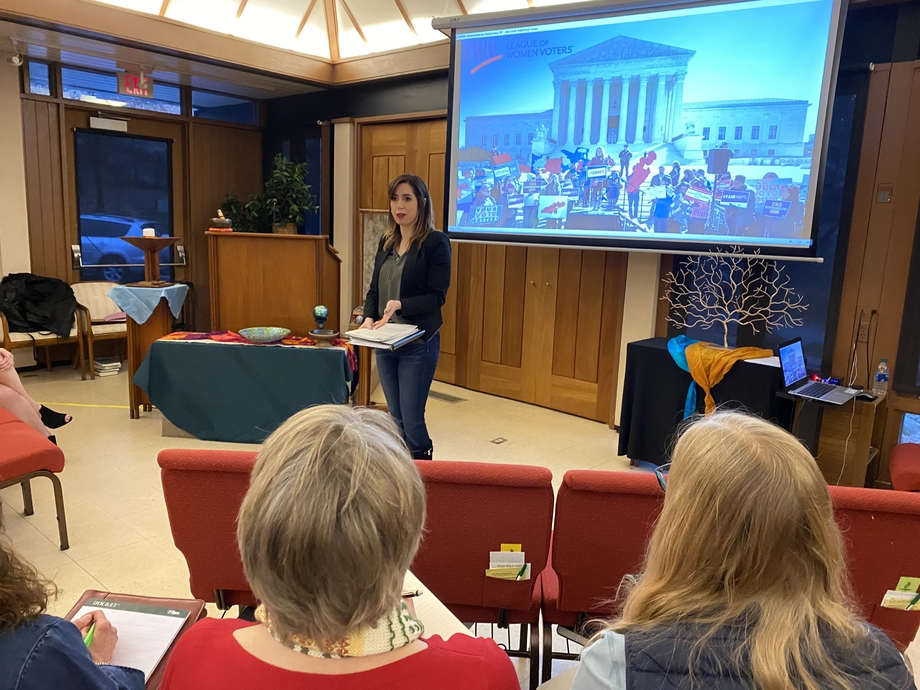 On March 1st, we celebrated the 100th anniversary of one of our local Leagues here in Arkansas. We used the celebration of this milestone as a platform to elevate our work with the People Powered Fair Maps campaign. PPFM signs hung all over the venue, bands played, and over 200 people celebrated with us, registered to vote, and signed up to help with our ballot initiative campaign.  Just days later, we filed a redistricting reform ballot petition under the name Arkansas Voters First alongside the Secretary of State.  However, in mid-March, the Arkansas Governor issued a state of emergency due to COVID-19, which effectively halted our campaign’s efforts to gather signatures.

Working with a dedicated and creative team was paramount to getting through such a crucial time for our campaign.

We needed to pivot, and we did.  We went online to continue with our education and advocacy efforts.  We sent weekly newsletters, hosted an online Drinks & Dialogue about the campaign, and continued to create and share content for our website and social media outlets.  Working with a dedicated and creative team was paramount to getting through such a crucial time for our campaign—with a deadline of July 3rd looming over us to turn in 89,151 signatures.  As far as states with ballot initiatives, Arkansas has one of the most onerous processes given the strict witnessing and notarization requirements.

Finding ourselves in this unprecedented time, we quickly realized that we would need to seek legal relief to move our People Powered Fair Maps ballot initiative forward, or risk redistricting reform being essentially frozen out of the ballot in November.

We brainstormed with League leaders from other states to learn best practices and strategies for moving forward with signature collection. In April, we began working with LWVUS and the Campaign Legal Center to file a federal lawsuit seeking a safe way to allow Arkansans the ability to exercise their constitutional rights to support an amendment for fair and transparent redistricting reform.

Moving forward in this way is not anything we ever anticipated or prepared for and, yet, we found ourselves sitting through oral arguments in a Federal court via Zoom.  This is what #DemocracyInTheTimeOfCovid looks like. The judge in our case granted our request to remove the witnessing requirement, allowing individuals to sign our petition via mail and not be forced to choose between participating in direct democracy and their health.   At the core of this petition and the lawsuit is the League’s mission to empower voters and defend democracy.  Now more than ever, that protection is vital.  Obtaining legal relief to get our petition on the ballot is one of many issues we find our state and country facing this year.  This may mean more lawsuits and battles but, as a League, we are dynamic and determined to fight for voters’ rights as we have for more than 100 years.

Update: As of 6/1, the Secretary of State filed an appeal and LWV of Arkansas will see this through to the Eighth Circuit.  We are currently collecting signatures and will not give up the fight to establish an independent redistricting commission in the state of Arkansas.