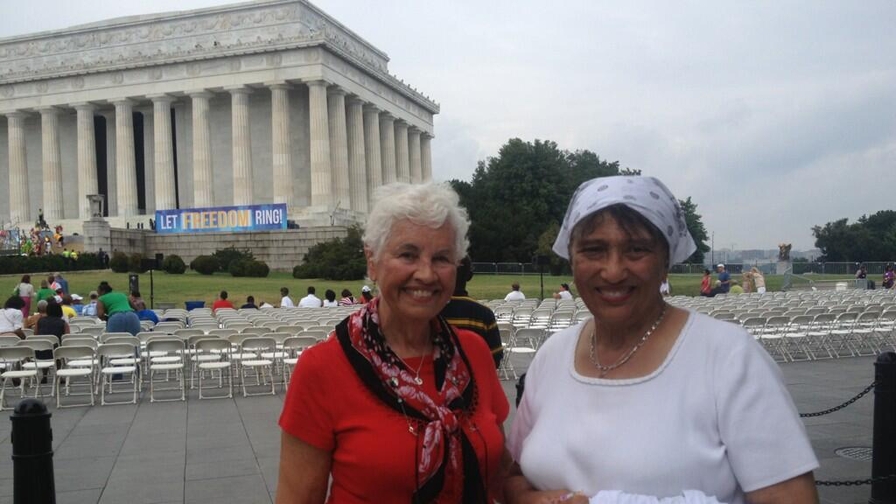 Powerful Quotes on Voting Rights from the March on Washington

Last week, the League of Women Voters joined fellow civil rights groups and activists from across the country in gathering at the Lincoln Memorial for the 50th anniversary celebration of the 1963 March on Washington. The anniversary, which took place just months after the Supreme Court’s decision to gut the Voting Rights Act (VRA) of 1965, brought thousands to the nation’s capital, many of whom retraced the steps of the 1963 march while carrying signs denouncing the widespread attacks on voting rights sweeping the country: "The new Jim Crow must go!" and "50 years later still fighting to vote!”

The attention on voting rights continued Wednesday, when politicians, civil rights leaders and celebrities gathered for the commemorative “Let Freedom Ring!” ceremony, organized by the 50th Anniversary Coalition for Jobs, Justice and Freedom. We were especially honored to sit behind a Texas woman who had attended the original 1963 march, and we were pleased to see League member Kathy Scruggs of Maryland, who had also courageously marched for justice in 1963.

The mood at Wednesday’s ceremony was reflective and full of hope – even despite the rain that persisted off-and-on throughout the nearly five hours of speakers and performances. A common thread was woven through the many speeches: While we look back on the hard-won victories of the civil rights movement, we must realize that the fight for justice still continues today. As Martin Luther King famously said, “The arc of the moral universe is long but it bends toward justice.” Speaker after speaker called for the urgent need to continue Martin Luther King’s fight for equality and stop the onslaught of attacks on voting rights. From the words of Lynda Johnson Robbs, daughter of President Lyndon B. Johnson, to former President Bill Clinton, the crowd was reminded of the blood, sweat and tears that went into the civil rights movement.

Here’s a rundown on some of the many calls to protect voting rights from speakers throughout the week of activities honoring this historic event.

Organizers of the 1963 march realized that "Change does not come from Washington but to Washington," said President Obama, the final speaker at Wednesday’s commemorative event. “The March on Washington teaches us that we are not trapped by the mistakes of history; that we are masters of our fate. But it also teaches us that the promise of this nation will only be kept when we work together.”

President Obama’s words remind us that in order to continue the fight for Martin Luther King’s dream of justice for all Americans, we must join together in challenging all signs of discrimination. As we continue to face attacks on voting rights across the country, join the League in calling on Congress to take immediate action to protect our voting rights.

Check out our Facebook albums from the 50th Anniversary Commemorative March on Washington and the “Let Freedom Ring!” anniversary ceremony.