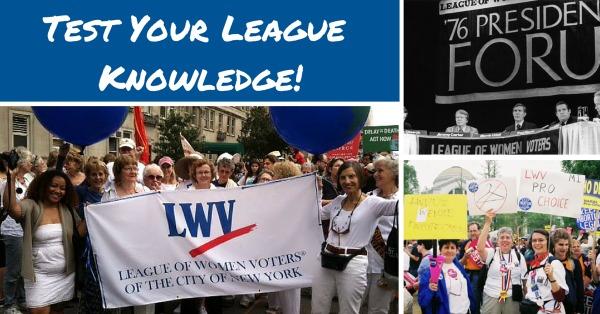 Ninety-five years ago, Carrie Chapman Catt called for a League of Women Voters to “finish the fight” to ensure that every eligible voter has free and fair access to the polls as well as to empower voters to influence their government to better serve their interests. The League’s first major victory came just six months later with the passage of the 19th Amendment, which secured women the right to vote. But that success was just the first of many.

Since then, the League has been critical in Making Democracy Work® across a range of issues. How well do you know the League’s impact on Americans’ lives? Test your knowledge and learn more about just some of the League’s great accomplishments over the past 95 years!

The League – powered by the efforts of civic volunteers and activists across the country – has made an impact on a range of key issues in the last 95 years. Not only have we undertaken sustained efforts to improve the voting process and protect the environment, but we also assisted in the creation of the United Nations and the protection of Americans’ civil liberties.

Take our quiz and learn more about the ways the League has improved our country.

As we march towards our 100th anniversary, the League will continue to fight voter discrimination and keep secret money out of our elections in order to ensure that our elections are fair, free and accessible. We’ll also continue to push for improved access to health care as well as a sustainable planet for everyone.