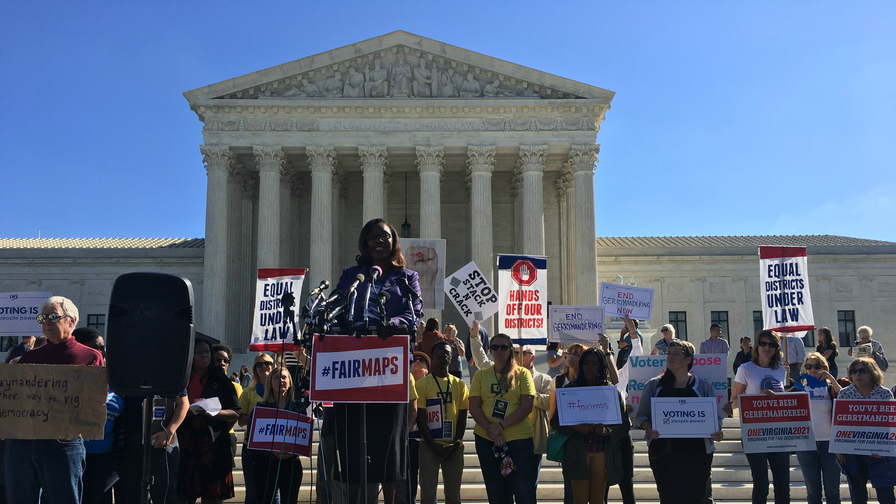 Rallying for Fair Maps at the Supreme Court

This morning oral arguments began in the Supreme Court case of Gill v. Whitford, a case that challenges partisan redistricting in Wisconsin and could have implications for redistricting nationwide.

But the real show was outside the courtroom.

I joined voting rights leaders and a bipartisan group of politicians at a rally calling for an end to gerrymandering.

That’s a big word, “gerrymandering”, but its meaning is quite simple. This is the process of politicians unfairly drawing electoral maps to benefit themselves and their political party. Not the voters.

The result? Dysfunction. Mistrust. And public policies that do not reflect the will of the people.

In Wisconsin, in North Carolina, in Ohio and Pennsylvania, and all across the country there are districts that don’t make sense, that cross school districts, that break up communities – and for what? So that the politicians hand-pick their electorate, effectively taking away the rights of voters to decide who will represent them.

It is high time we took charge of this and put an end to partisan gerrymandering.

And it can be done.

In California, the League of Women Voters helped spearhead a successful statewide referendum that ended gerrymandering of political districts.

We formed a coalition across the political spectrum. The business sector, labor organizations, and concerned members of community groups all came together to create a ballot measure. The intent? To be fair to voters.

And that’s what the voters wanted. More equality in the system.

So, working across party lines – we formed an independent commission that redrew the electoral map in California.

And it restored the public trust. The districts were drawn for the voters – not for special interest or a particular political party.

Around the country in other states, both parties have taken advantage of partisan gerrymandering when they are in power.

But today is the beginning of the end.

It is up to the Supreme Court to create ground rules that will help restore trust in our electoral system and create a more democratic and fair country.

This case is about fairness. Fairness to the voters.