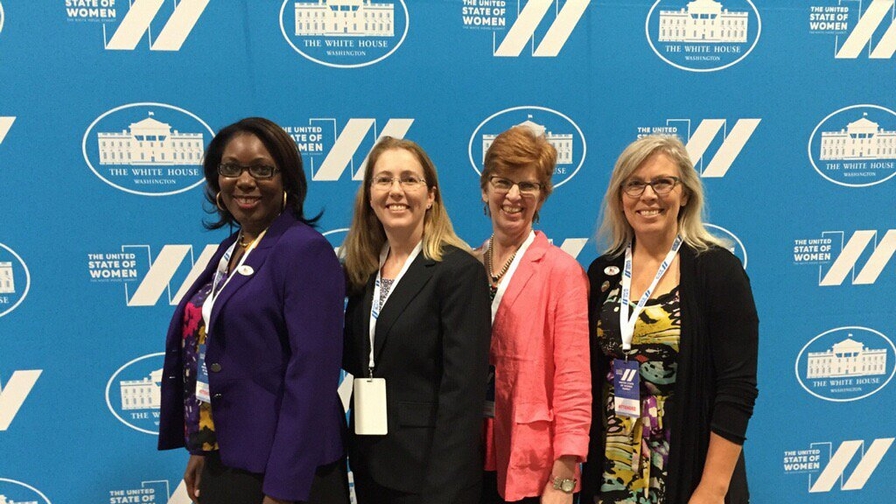 Reflections on the State of Women

Yesterday, along with the League’s president Elisabeth MacNamara, and some senior League of Women Voters staff, I attended the United State of Women Summit hosted by the White House. Attendance was high, but nice weather and good attitudes by fellow attendees resulted in an inspiring atmosphere, even while waiting an hour to clear security. The event, which highlighted the White House’s initiatives on women and girls, was a star studded event with political heavy weights such a President Barack Obama and First Lady Michelle Obama, Vice President Joe Biden, Representative and former Speaker of the House Nancy Pelosi, Attorney General Loretta Lynch as well as Hollywood elites, including Oprah, Mariska Hargitay, Kerry Washington, Patricia Arquette, and national business leaders like Warren Buffett and Dina Habib gracing the stage.

Yet, for me these weren’t the most memorable or impressive parts of the Summit. By far, the speaker that I have raved about the most, was 11 year old social entrepreneur Mikaila Ulmer, founder and CEO of Me & the Bees Lemonade. Being 11 is a distant memory and I can’t begin to fathom what would have been on my mind at that age. However, it is fair to assume that I wasn’t thinking about economic security, entrepreneurship, power and engagement. Mikaila was confident, commanding and clear. She understands her mission, product and how to pivot on message as needed. Not only does Mikalia possess business acumen, she’s also taking a stand and a making a difference. Bees are critical to our environment and food supply, yet their very existence is at risk.

I was also struck by the diversity of the audience. The attendees, who were predominately female, were younger, more diverse and socially conscious than most of the meetings I have attended in years. The room represented the rising electorate that we both want and need to help carry out the League’s work.

As each plenary and workshop speaker presented, I was reminded of the importance of the vote and our work. The strides discussed during the Summit could easily be derailed or forward motion lost if voters fail to remain vigilant to ensure candidates remain focused on issues important to them. Leveraging the power of the vote to create a more perfect democracy remains critically important both from an issues and candidate perspective.

Finally, as I thought about the name of the Summit – United State of Women, I couldn’t help but think how 96 years of Making Democracy Work® laid the groundwork for this successful event. Without the right to vote and helping to equip women to exercise their vote, as well as the push to provide women with the skills and education necessary to pursue elected office and other leadership positions, it is possible that the progress on key issues like economic empowerment, civic and social engagement and women leadership may have continued to lag even longer.

We know there is still work needed to ensure a representative democracy and our voice, which seems silent in some of the current national conversation about the state of women needs to be revitalized. It was an honor to be counted among the 5,000 attendees at the Summit. It is my hope that moving forward, the White House and others will understand and acknowledge that the League continues to be an important voice to engage in the dialogue of how best to leverage the power of women to create a more perfect democracy.