Take Action: The FEC needs to Hear From You 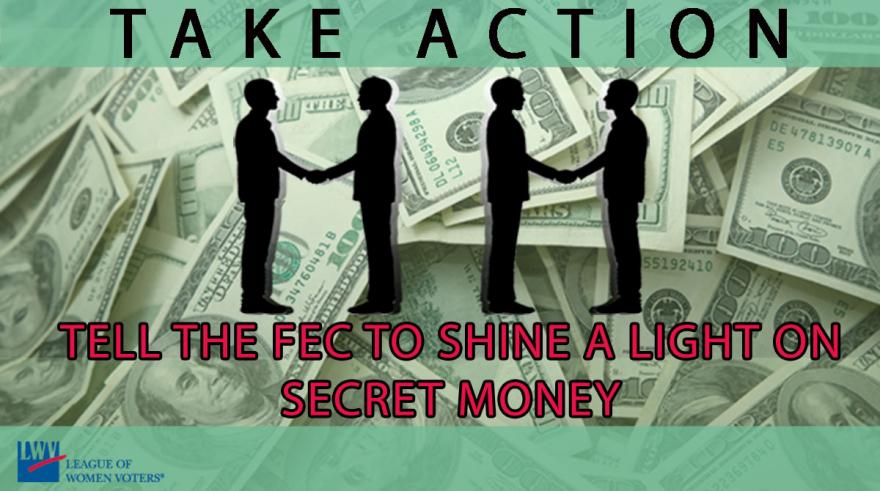 We’re just one week away from our deadline to submit comments to the Federal Election Commission (FEC) regarding how "to address corruption in the political process." So far, League supporters have generated over 12,000 comments to the FEC in support of stricter disclosure regulations and narrowing the definition of coordination between candidates and outside groups.

But we need your help though to get us to our comment goal. Tell the FEC to stop the coordinated spending that is poisoning our elections!

The 2014 election was the most expensive mid-term election in our history. Super PACs raised and spent more than $600 million dollars in 2014 to elect candidates who will do their bidding and defeat those who might resist. They were able to do so because they are suppposedly "independent" from the candidates, but in reality, there are many ways to coordinate that are not blocked by the FEC's weak regulations. In addition, millions of dollars of secret money from dark money groups poured into the political system seeking to buy our elected officials and distort our elections.

As the federal agency in charge of our nation’s campaign finance laws, the FEC has the authority, under existing law, to set disclosure rules and rigorously define “coordination,” but thus far they have refused to do so. The FEC is now receiving public comment about steps they should take “to address corruption in the political process.” We need you to tell the FEC to act and enforce the law.

The American voter has a right to know who is funding political campaigns. And the American public has a right to have the law against unlimited coordinated expenditures strictly enforced. We must work to maintain the integrity of our Democracy by ensuring our elected official will be responsive to voters and not to the big money and the secret money from special interests. The stakes are too high, and the League will not stand by and let our political system be corrupted.

Tell the FEC to maintain the integrity of our democracy by ensuring our elected official will be responsive to voters and not to the big money and the secret money from special interests.