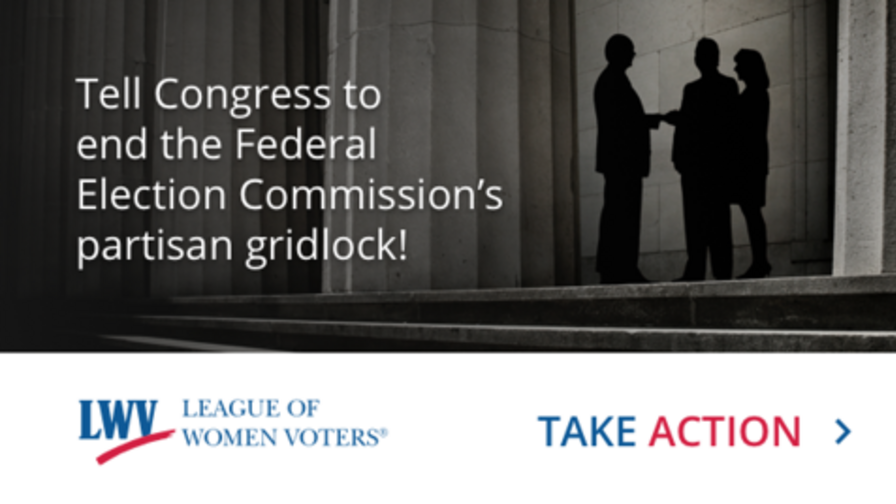 The agency that is tasked with overseeing federal laws governing money in politics, the Federal Election Commission (FEC), is broken. Paralyzed by its own structure, with four commissioners who regularly cast tie votes on a partisan basis, the FEC has failed to enforce and properly interpret the nation’s already weak campaign finance laws.

It’s time to reform the FEC. Tell Congress to support the Federal Election Administration Act of 2016.

The League has endorsed legislation by Senator Tom Udall (D-NM) and Representative David Price (D-NC) that would create a new independent agency to replace the FEC. The new Federal Election Administration (FEA) would be comprised of five commissioners, appointed by the President and confirmed by the Senate, where only two members can be from the same political party. The fifth commissioner would be appointed on a nonpartisan basis from a list of candidates selected by a blue-ribbon panel of retired federal judges, former law enforcement officials or individuals with election law experience. With this five-member structure, the new legislation would end gridlock at the commission and put the public’s interests over partisan interests.

The new Federal Election Administration will still have the responsibilities previously held by the FEC to administer campaign finance laws and the presidential public financing system, as well as to issue regulations and advisory opinions. The FEA also would have the authority to conduct investigations of possible violations. However, the legislation sets up a new system of administrative law judges with jurisdiction over individual enforcement cases in order provide for consistent and impartial enforcement.

The League believes in the power of women to create a more perfect democracy. That’s why we’ve been leading the charge for campaign finance reform at the state, local and federal levels for more than four decades - but we need you to join our fight.

Join the fight to end gridlock at the Federal Election Commission.