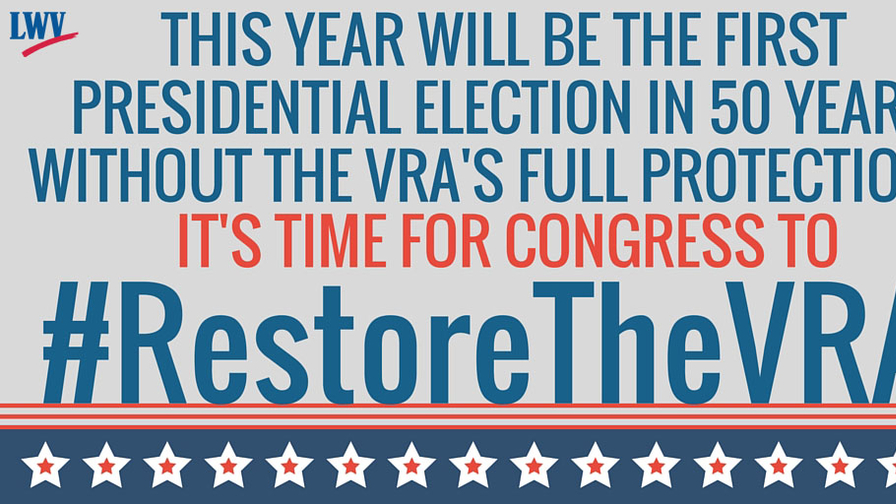 Saturday marks the three-year anniversary of the Supreme Court’s decision to gut key provisions of the Voting Rights Act (VRA). We’ve had three years of bad laws that make voting harder in states all across the country. But there is a solution. Tell Congress to repair and modernize the Voting Rights Act TODAY!

The Voting Rights Advancement Act was introduced to address the voting discrimination unleashed in the wake of the Shelby County v. Holder decision. Yet the legislation is being held up on both sides of Congress. It is an unfortunate fact that discrimination in voting against racial, ethnic and language minorities continues in America.  This should be unacceptable in the greatest democracy in the world.

Add your voice! Tell your Senators and Representatives to move the Voting Rights Advancement Act forward.

Without congressional action to repair the VRA, 2016 will mark the first presidential election in 50 years without its full protections. Throughout the 2016 primaries we saw voters face a variety of obstacles, from reduced polling places, to long lines, to removal of registered voters from the rolls, and these challengers are just a canary in the coalmine for what’s to come in November without the VRA’s protections.

It’s time we all call on our Senators and Representatives to take action and end voting discrimination in this country.

Shelby County v. Holder was a landmark case addressing the constitutionality of two provisions of the Voting Rights Act of 1965. Here's what's happened in the five years since the case was decided.