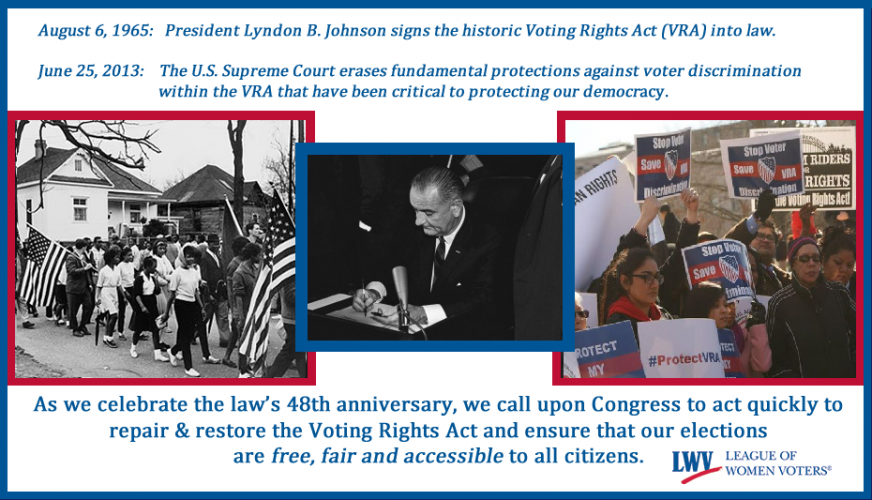 Forty-eight years ago today, President Lyndon B. Johnson signed the historic Voting Rights Act (VRA) into law. Unfortunately, earlier this summer the U.S. Supreme Court erased fundamental protections against racial discrimination in voting that have been critical in protecting our democracy.

The damage to the VRA can and must be fixed – Congress has the power to act swiftly to restore the effectiveness of the Voting Rights Act. Tell your members of Congress to work quickly to repair and restore the VRA.

Before adjourning for the August recess, both the Senate and the House of Representatives held hearings to begin discussing solutions to discrimination at the polls and the path forward for the VRA. We were encouraged by what we witnessed – members from both sides of the aisle expressing a need to address the Supreme Court’s mistake and vowing to ensure our elections are free, fair and accessible to all citizens.

Join with the League of Women Voters and thank your elected officials for starting the process to fix the VRA and encourage them to repair and restore it quickly.

Following the Supreme Court’s decision, we’ve seen an all-out attack on voting rights across the country. States like Texas that had been subjected to the VRA’s federal pre-approval process took steps to implement their photo voter ID laws nearly immediately. North Carolina pushed through an omnibus voter suppression package that the Governor has pledged to sign. If it becomes law, it would impose a photo voter ID component, restrict early voting, cut preregistration for 16 and 17 year olds, eliminate same day registration and much more.

The League will continue to pursue all avenues to fight for voters’ rights, but we need strong action by Congress to restore the Voting Rights Act protections that have helped us prevent racial and language discrimination in our elections for decades.

The Voting Rights Act remains vitally important and must be restored – tell your members of Congress to work quickly to repair and restore it to its full strength.