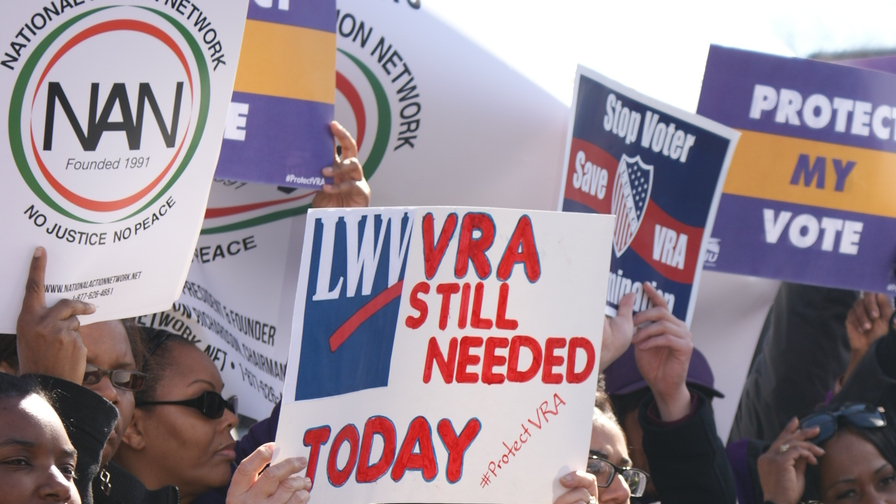 Taking the First Step Toward Repairing the Voting Rights Act

This week, both the Senate and House of Representatives held hearings to discuss the future of the Voting Rights Act (VRA). Late last month, the U.S. Supreme Court gutted the Voting Rights Act of one of its key enforcement mechanisms, erasing fundamental protections against racial discrimination in voting that have worked to protect our democracy for over 40 years. The Court ruled unconstitutional Section 4 of the landmark law. Section 4 provided the formula that determined the states and jurisdictions where changes in election law required preclearance by a federal court or the Department of Justice due to their past discrimination.

In its decision, the Supreme Court left open a path for Congress to rework and restore this critical piece of civil rights legislation. This week, Congress got to work holding hearings in both chambers and beginning to discuss possible solutions and the path forward. While concrete proposals will not be drafted until later this year, in holding hearings this week, both branches of the legislature showed that the Voting Rights Act could continue to be an integral part in preventing voter discrimination.

In Wednesday’s Senate Judiciary Committee hearing Congressman Jim Sensenbrenner (R-WI), who led the reauthorization efforts in 1982 and 2006, reaffirmed his commitment to the Voting Rights Act, calling for free, fair and accessible elections for all Americans. Sensenbrenner also recalled President Ronald Reagan calling the right to vote the ‘crown jewel of our liberties’ as he supported the 1982 reauthorization of the VRA. Congressman John Lewis (D-GA), who as a civil rights activist helped lead the fight for the VRA, told of the injuries he sustained while fighting for voting rights in the South in the 1960s. Later witnesses declared updating the Voting Rights Act to be a non-partisan issue and praised the voter registration efforts of the League of Women Voters. They also underscored the fact that discrimination in voting continues to occur and that fixing the VRA is critical to continuing to prevent discriminatory laws from taking hold in municipalities and states across the country.

While Thursday’s hearing in the House Judiciary subcommittee on the Constitution and Civil Justice had more witnesses and members of Congress who were skeptical of the need to fix the VRA, the need to prevent discrimination in voting was still acknowledged. Instead of proposing a new enforcement mechanism, some suggested that the VRA would continue to prevent voter discrimination through Section 2. While Section 2 is an important enforcement mechanism in current law, it is by no means a replacement for repairing the damage done by the Supreme Court’s decision. Section 2 enforcement comes after a discriminatory law goes into effect, whereas the preclearance process can prevent the implementation of discriminatory laws before any voters are discriminated against and their votes suppressed.

The preclearance process outlined in Section 5, now effectively halted until Congress acts, has proven to be the least costly, and least damaging, mechanism for preventing racial and language discrimination in voting. If we do not repair this process, voting rights advocates would be battling a variety of attacks not only at the state level, but also in local and county jurisdictions as new election laws pop up. Simply tracking these changes at the local and county level, let alone taking action against harmful changes, would prove a daunting task to advocates and elections officials alike. Preclearance has proven to be essential to stopping discrimination at the polls time and time again; members from both sides of the aisle acknowledged that during the 2006 reauthorization of the VRA when more than 15,000 pages of evidence were amassed showing discriminatory elections practices. Without an operable Section 4 and 5, that could clearly grow exponentially.

It is clear that the forms of discrimination have changed since 1965 when the Voting Rights Act was passed. Discrimination today is more subtle even while it is systemic and institutionalized. An updated VRA will need to take this into account. Yet, it was promising to hear members of Congress on both sides of the aisle agree it remains a problem and discuss ways to combat it. This will surely be a complicated process, yet we are hopeful that it is one where Congress will be able to come together to protect our democracy and the right to vote.