This Thanksgiving, We Thank Our Pro Bono Litigators! 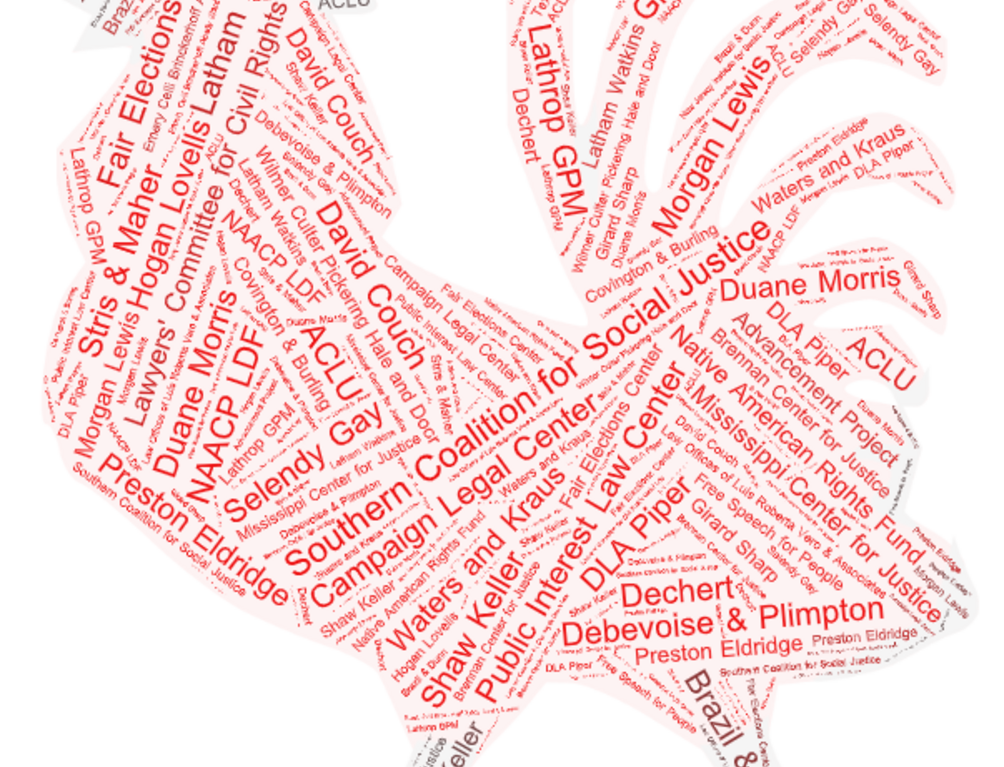 This First People’s Feast Day, we are reminded of the diverse coalition of lawyers from private law firms and nonprofit legal advocacy organizations who stepped up to represent the League’s litigation to fight against voter intimidation, expand safe access to polls, protect the U.S. Postal Service, and hold the Census Bureau accountable to conduct a complete and accurate count amid the COVID-19 pandemic in 2020.

In the nascent stages of COVID-19, the Southern Coalition for Social Justice, Wilmer Cutler Pickering Hale and Door, and Fair Elections Center represented the LWV of North Carolina (LWVNC) in a lawsuit against the state’s election, transportation, and public health officials for their failure to institute reasonable accommodations to protect the health and safety of voters during the pandemic. After numerous fact and expert witness depositions, lengthy oral arguments, and 200 pages of briefing, the court ruled in favor of the League, requiring election officials to establish a process by which voters are given the opportunity to cure ballot deficiencies prior to the ballot’s rejection. As of Oct. 26, LWVNC’s legal partners have protected the votes of at least 31,000 North Carolinians.

After the Census Bureau announced that it would disregard the bipartisan extension of its canvassing and data collection efforts in August, Latham Watkins, Brennan Center for Justice, and the Lawyers’ Committee represented the League of Women Voters of the United States in filing a complaint against the Census Bureau seeking to compel the Bureau to comply with the deadline set by Congress and count all individuals living in the United States, as constitutionally required. Following hours of hearings which extended late into the evening, hundreds of pages of briefs, and spectacular oral advocacy by Latham Watkins, the court ordered the Census Bureau to continue canvassing efforts through Oct. 31, 2020. Despite the Supreme Court order permitting the Census Bureau to stop counting on Oct. 16th, Latham Watkins, the Brennan Center, and the Lawyers’ Committee obtained an extra 20 days of counting that would not have occurred had the League not filed suit, securing a completer and more accurate census count. The League’s legal partners continue to litigate this case as the Census Bureau embarks on data processing to report the final count to the President on Dec. 31, 2020.

In August, Mississippi was one of the few states who failed to provide voters with reasonable voting accommodations during the COVID-19 pandemic. Due to valiant efforts by the Southern Poverty Law Center, Lawyers’ Committee, and Dechert, who represented the LWV of Mississippi, we filed a complaint against the state — in a case so impactful — with compiled amicus briefs submitted by 17 states. As a result of the League’s legal partners, Mississippi election officials enacted one of the most robust notice and cure processes for ballot deficiencies and established curbside voting for voters with COVID-19 symptoms to ensure polling places remained safe.

On the last day to register to vote in general election, Oct.13, Virginia’s Citizen Portal Online Voter Registration website became unavailable due to an inadvertently severed fiber optic cable. Within hours of the outage, the Lawyers’ Committee for Civil Rights Under Law, Advancement Project, and Hogan Lovells represented us in filing an emergency complaint against the Virginia Department of Elections requesting the court extend the voter registration deadline to 11:59 p.m. on Oct. 15, 2020, to account for the outage. The day after the complaint was filed, the coalition of lawyers appeared in court for a hearing, and because of their advocacy, the court ordered an extension of the voter registration deadline, enfranchising approximately 79,500 Virginians amid record levels of voter turnout.

Debevoise & Plimpton, in partnership with the Lawyers’ Committee and ACLU of South Carolina, saved at least 2,428 South Carolinians’ votes from rejection by obtaining a preliminary injunction prohibiting signature matching without a notice and cure process in the state.

The Campaign Legal Center, ACLU, Public Interest Law Center, New Jersey Institute for Social Justice, and DLA Piper have also supported us in defending against unprecedented challenges to absentee and mail-in voting in Pennsylvania, Montana, New Jersey, and Kentucky. Fried Frank, the ACLU, and the Campaign Legal Center helped secure a Supreme Court victory suspending witness requirements for absentee and mail-in ballots for the Rhode Island League and the 168,770 Rhode Island voters who chose to vote by mail in the November General Election.

In Minnesota, Lathrop GPM, Emery Celli Brinckerhoff Abady Ward & Maazel, and Free Speech for People assembled a complaint in less than three days against a business seeking to employ armed guards to watch polls, prompting the Minnesota Attorney General to reach a settlement agreement  which protected Minnesotans from enduring potentially lethal voter suppression through 2022. Notwithstanding the numerous legal challenges to curbside and drive-through voting, the ACLU of Texas and ACLU Voting Rights Project filed a motion to intervene for the LWV of Texas on the Sunday evening before Election Day to fight against an effort to invalidate over 127,000 votes cast by voters in Harris County. Pillsbury also represented the Florida, California, and Texas Leagues in filing a friend of the court brief in three cases challenging the Trump Administration’s executive orders and memorandums seeking to undermine the integrity of the census.

Lastly, as election results began to trickle into the battleground state of Pennsylvania, the Public Interest Law Center, Lawyers’ Committee, Covington & Burling, and the ACLU of Pennsylvania represented the Pennsylvania League and all voters across party lines to ensure that all votes were counted in three Trump Campaign suits against election officials in Blair, Berks, Lancaster, Carbon, Clinton, Dauphin, Lycoming, Montgomery, and Perry counties. Collectively, our legal partners protected the votes of at least 680,000 voters as all three suits were dismissed by the court.

Attorneys are at the frontlines of the battle to protect democracy and ensure trust in our electoral system through enforcement of the First and Fourteenth Amendments, Voting Rights Act, National Voter Registration Act, and other state and federal protections which establish the individual right to vote. Without the assistance of our legal partners, the League could not effectively work to manifest a more perfect democracy where every person has the desire, right, knowledge, and confidence to vote. We are truly grateful for the tremendous support from more than 250 attorneys across the country, who help us live our mission to empower voters and defend democracy!