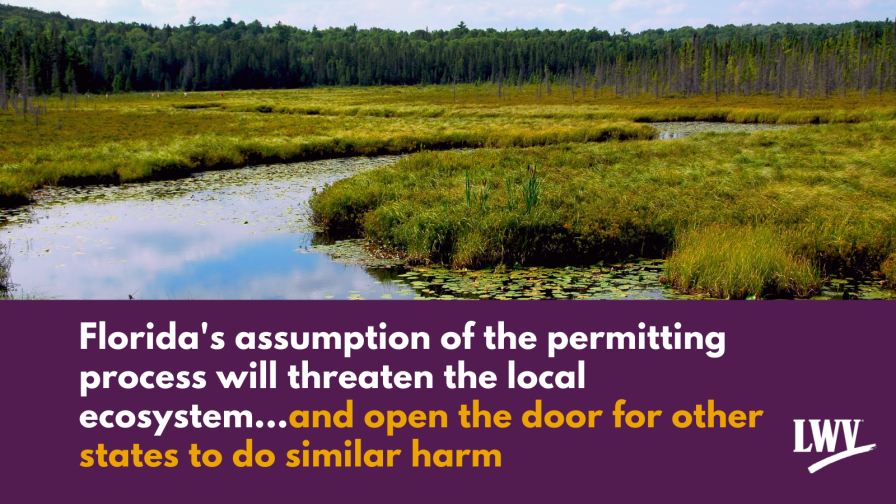 The Environmental Protection Agency (EPA)’s job is to protect ecosystems, endangered species, and human health. Yet a December 2020 decision from the EPA abandoned that duty by handing permit approval rights from the EPA to the state of Florida, which will allow the state to approve wetland projects without EPA review. The EPA did so without any guarantee that Florida will be able or willing to take on that task.

Environmental groups argue that this decision is not only disastrous for the environment, but also illegal. And if allowed to move forward, Florida’s assumption of the permitting process will threaten the local ecosystem and endangered species population—and open the door for other states to do similar harm.

To understand this case, it’s important to understand how the permitting process normally works. Under the Clean Water Act, the EPA is tasked with regulating pollution and water quality. When a developer wants to build on or remove parts of wetlands, they have to request a permit from the U.S. Army Corps of Engineers, who partner with the EPA in the permitting process.

These projects can have a significant impact on the ecosystem: they may damage the broader 'aquatic environment' or impact endangered species.

The permitting application process is an essential step in ensuring that any potential impact is identified, analyzed, and treated. That’s because these projects can have a significant impact on the ecosystem: they may damage the broader “aquatic environment” or impact endangered species. During the permitting process, the EPA and the U.S. Army Corps of Engineers figure out what the project’s environmental impact will be and how to reduce it. If projects don’t meet the EPA’s standards, it’s because they'll damage the wetlands, often permanently. In these instances, permits are rejected.

Although the right to determine who receives permits rests with the federal government, the Clean Water Act includes a provision allowing states to apply to take over the process. To do so, a state must show that their permitting process is able to go above and beyond the federal one, that it is as rigorous and protective of the wetlands as the federal process, and that they have adequate funding to manage it. Put simply, the state must demonstrate that it is able to shoulder the responsibility of this permitting by producing a detailed, protective plan that complies with federal law before the EPA can give them permitting power.

Previously, only two states have taken over the permitting process: Michigan in 1984 and New Jersey in 1994. The reason so few states have taken over this process is the difficulty of meeting the EPA’s approval standards alongside the cost of overseeing and implementing the program. In fact, in previous years, Florida had twice considered applying but decided not to because of the costs and liability concerns.

Last year, Florida sought EPA approval to take over the Clean Water Act permitting program. They asked the Trump administration for permission in August 2020, and it was granted in December.

Plaintiffs say that the EPA was wrong to approve Florida’s application at all—regardless of whether they followed the process correctly—because Florida simply did not show that it is able to shoulder this important burden.

The plaintiffs in this case have pointed out several problems with how the EPA made its decision. Some are technical: for example, Florida and the EPA did not follow the required timeline during the application process. More significantly, however, plaintiffs say that the EPA was wrong to approve Florida’s application at all—regardless of whether they followed the process correctly—because Florida simply did not show that it is able to shoulder this important burden.

Beyond the legal issues raised in the complaint are fears of political bias: Florida developers donate extensively to state politicians, and outside groups worry that those relationships will play a role in permitting decisions. As Tania Galloni, Earthjustice’s managing attorney describes it, “Developers have called this the ‘holy grail’ because it would make it easier, faster, and cheaper for them to get permits for big projects with less oversight and accountability for environmental impacts.”

Florida’s assumption of permitting is significant in itself; Florida has more wetlands than any state (other than Alaska and Hawaii). But environmental groups also worry that this could set a precedent that other states could take advantage of.

In December, EPA Administrator Andrew Wheeler explicitly called for other states to “take advantage of this opportunity and move forward with their own applications.” This is concerning because Florida’s application process was significantly easier than processes states had previously faced, since Florida did not have to detail how it would fund the program and omitted key parts of its plan to ensure compliance. Allowing this laxer standard will encourage other states to assume permitting responsibilities under substandard programs, further eroding environmental and endangered species protection.

The League of Women Voters support the Center for Biological Diversity and all those fighting the EPA’s 2020 decision. The preservation of our Earth’s ecosystem is an essential component of public health and the environment. Learn more about our stance on protecting our environment here.

The League joined a letter lead by the Indigenous Environmental Network urging the President and Vice President to shut down the Dakota Access Pipeline (DAPL) .

The League of Women Voters has been at the forefront of the environmental protection movement for decades, consistently supporting legislation to preserve our nation’s natural resources and protect our public health. We support legislation that seeks to protect our country from the physical, economic and public health effects of climate change while also providing pathways to economic prosperity.