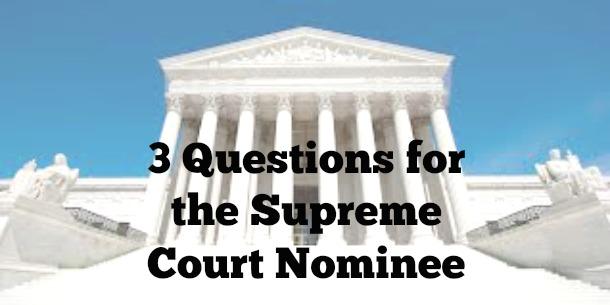 The next Supreme Court nominee, whom President Trump will nominate this week, will play a major role in the course for American democracy over the coming decades.  That may seem like an exaggeration, but the Supreme Court is currently divided four to four on most major issues. The incoming justice will ultimately be the deciding vote on crucial issues that shape the direction of our country.

The League of Women Voters believes that any Supreme Court nominee should share his or her views on fundamental issues.  We have three questions for the nominee:

1. Must the Executive Branch obey court orders from the federal judicial system?

Our system of checks and balances is the basic tenet of a free democracy.  To prevent authoritarianism, the Founders made sure that that no one branch of the government could dominate the others.  But in recent days, it appears that the Executive Branch is challenging that system by refusing to obey the federal court orders. The Supreme Court nominee must take a stand, one way or the other, on the role of federal courts in our system of government.

2. What is the appropriate role for voting rights in our democracy?

Our nation was founded on a belief that voters should be in charge of our government rather than government being in charge of the voters.  However imperfect at the beginning, citizen voting rights have grown through constitutional amendments to include women, racial and ethnic minorities and young people.  But we are seeing efforts to roll back voting rights, with laws designed to make it more difficult for people to exercise their right to vote.  The Supreme Court nominee should let the American people know his or her position, whether voting rights enforcement is a vital component of our representative democracy or if the nominee thinks limitations can be justified under our Constitution.

3. Is big money in politics a fundamental part of our electoral system, or can limits sometimes be justified?

Some believe that corporations, organizations and individuals should be able to spend unlimited amounts of money to influence elections, and to do so secretly.  Others see this as an existential threat to our democracy.  The Supreme Court nominee should state his or her beliefs related to the influence of money in our elections.

Judicial nominees should not be required to tell us how they will decide future cases, but they should share with the public the basic principles they support or oppose.  For the Senate to carry out its constitutional duty to advise and consent on judicial nominees, truthful answers about basic principles are required.  A presidential nomination is not a blank check.  The Constitution requires the Senate to do its duty.

The League of Women Voters urges the Senate to explore these three fundamental questions with any nominee before voting to confirm or reject the next Supreme Court justice.