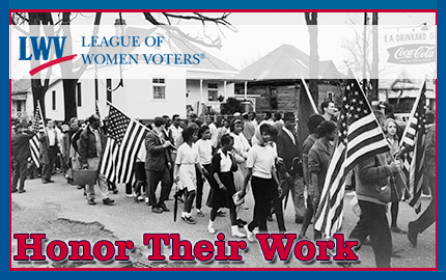 Fifty years ago, President Lyndon B. Johnson signed the Voting Rights Act (VRA) into law. The VRA was a cornerstone achievement of the civil rights movement and ensured that every American citizen, regardless of race, ethnicity or language, had equal access to the right to vote. But two years ago today, the U.S. Supreme Court overturned a key part of the VRA leading to a full frontal attack on the voting rights of American citizens.

Despite public outcry since the Supreme Court’s decision, Congress has ignored widespread voter discrimination and the will of the American people. Tell Congress it’s time to restore the Voting Rights Act!

We should be celebrating the 50th anniversary of the Voting Rights Act and its protections, but what’s to celebrate when voters are instead more vulnerable to discrimination than at any time since the law was first passed in 1965. Congressional leadership has yet to act on restoring the law, putting the right to vote for all Americans in continuing danger.

Every day that Congress fails to repair the VRA, Americans are in danger of increased barriers at the polls. Raise your voice and tell your members of Congress that now is the time to restore the VRA!

Congress must fulfill its obligations under the Constitution to eradicate voting discrimination by restoring the strength and effectiveness of the Voting Rights Act. Fifty years after brave Americans gave their lives for the right to vote, we cannot allow their legacy and the protections they fought for to continue to unravel.

The right to vote is one of the most basic rights in our country and it must be protected. Tell Congress to stand with the American people and restore the VRA!