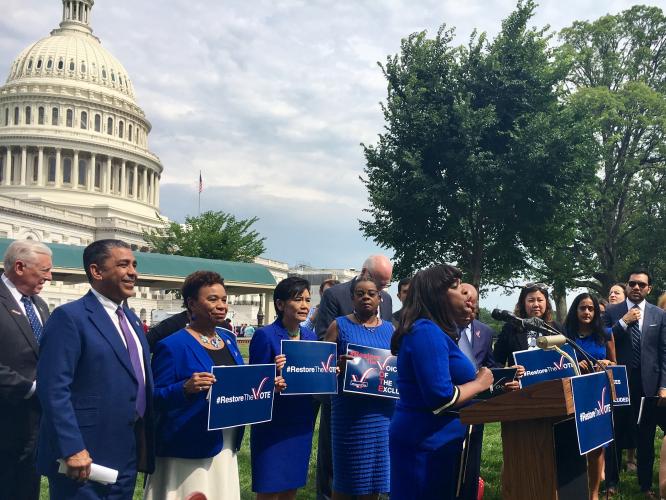 The members of Congress drew upon the history of the landmark civil rights protection legislation, the Voting Rights Act of 1965 (VRA), to emphasize the importance of guaranteeing the right to vote for all and mandating voter equality and resources for disadvantaged voter communities.

Senator Leahy emphasized the bipartisan and bicameral focus of the original VRA, asserting that voting rights should not be a partisan issue. Caucus leader Crowley echoed these sentiments, saying, “Voting rights are civil rights, and civil rights are human rights in a republic.”

The speakers shared their disappointment with the 2013 Supreme Court case Shelby vs. Holder that rolled back important protections of the Voting Rights Act, with Leader Pelosi asserting that the Court acted irresponsibly in its refusal to protect voting rights.

Many consider the sections rendered unenforceable by the Shelby vs. Holder decision (Sections 4B and 5, respectively) essential to the protection of underrepresented voters in states with extensive—and ongoing—histories of voter suppression.

To combat these rollbacks, the Voting Rights Advancement Act was introduced in 2015 and reintroduced last week: aiming to bring back the important aspects of the VRA that were deemed unconstitutional in 2013.

The Voting Rights Act has always been reauthorized and strengthened with nearly unanimous bipartisan support. This is an issue where Democrats and Republicans can come together to get the job done. Working to make the vote as accessible as possible—a fundamental component of representative government—transcends party identity and makes us stronger as a nation.

The League continues to encourage elected officials to protect and support disenfranchised voters through automatic voter registration and anti-gerrymandering efforts. Join the League in stopping voter suppression and enabling the creation of a more perfect democracy—get involved, and find your local League if you aren’t a member yet.