Voting Rights and Election Administration in the Dakotas

This guest blog post was written by Karen Ehrens, member of the League of Women Voters of Bismarck-Mandan.

On April 16, 2019, a day when Spring’s arrival was finally palpable, Dakota citizens and members of Congress gathered in the tribal headquarters at Fort Yates, on the Standing Rock Sioux Nation, for a field hearing of the U.S. House Committee on House Administration, Subcommittee on Elections. 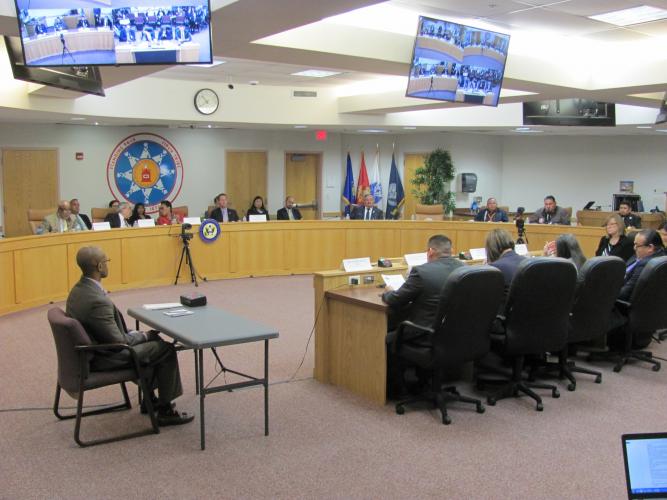 One of seven field hearings on the Voting Rights Act, the Standing Rock hearing focused on voting enfranchisement challenges faced by Native communities in the Dakotas. As such, the hearing opened by honoring local Native traditions with a prayer led by a Lakota elder, followed by a flag song shared by a Lakota youth drum group.

Three panels of witnesses were called by the committee, all of which offered testimony about barriers to voting experienced by Native Dakota communities. The first consisted of tribal representatives from each of the four tribal nations with headquarters in North Dakota: the Mandan, Hidatsa, Arikara Nation; Spirit Lake Nation; Standing Rock Sioux Tribe; and Turtle Mountain Band of Chippewa Indians.

All tribal representatives noted that voter identification—which must contain a residential address, since the passage of a law by the 2017 North Dakota Legislative Assembly—has created a financial and practical barrier for Native voters. As two tribal representatives remarked, formal identification is not necessary for everyday life on these sovereign tribal lands. Tribal representatives explained that the U.S. Postal Service does not deliver to many areas on reservations, so tribal residents use post office boxes to receive mail, and tribal ID cards list post office boxes as addresses. These are not “residential” addresses, and so are not acceptable forms of identification for voting in North Dakota.

It was also pointed out that the cost of a voter ID card, plus the time and transportation required to secure one, is high for people who live on reservations. The rate of Native people living with incomes below the poverty threshold—36% for the Standing Rock Sioux Tribe and 48% for the Spirit Lake Nation—is three to four times that of the state of North Dakota as a whole (10% in 2017). These factors and more have led to the disenfranchisement of Native voters in North Dakota.

The second panel of witnesses included the only Native American woman serving in the North Dakota House of Representatives, Ruth Buffalo; community organizer, Prairie Rose Seminole; and attorney for the Native American Rights Fund, Jacqueline De Leon. Representative Buffalo noted how Native votes have been diluted by the way legislative districts are drawn on her homeland of the Fort Berthold Reservation, home of the Mandan Hidatsa Arikara Nation, where the reservation is split into six legislative districts. Two polling places on the reservation were closed by county officials prior to the 2016 election, decisions made by county commissions that have no Native representation. Other barriers brought forward included the closing of post offices in rural areas and the small number of and distance between polling places.

Questions by Ranking Member Rodney Davis sought to make a point that the changes in voter registration did not negatively impact Native people, since 2018 voter turnout was higher than in previous midterm elections. Those testifying pointed out higher turnout was possible because of resources that were sent in from outside organizations answering calls for help. Representative Fudge’s response was, “Just because your results are better than some might have expected due to your strength and your fortitude, it still doesn't make it right."

OJ Semans, Sr., Co-Executive Director of the Native voting rights organization Four Directions, focused much of his testimony on the Help America Vote Act, which can provide funds to address voting accessibility gaps for Native communities.

If there are five ways to vote; don't give Native Americans three and then say that we're equal.”
-OJ Semans, Sr.

All of the voting barriers raised by the witnesses help to build a case for the protections provided by the Voting Rights Act.

“Don’t forget about us,” urged Alysia LaCounte, General Counsel for the TMBCI. Representative Fudge gave her word that a report summarizing what was gathered from all seven of the hearings being held across the U.S. would be shared with Congress, most likely in the fall.

Written testimony submitted by the League of Women Voters of North Dakota can be found here.

Recordings and written transcripts of the hearing can be found here.