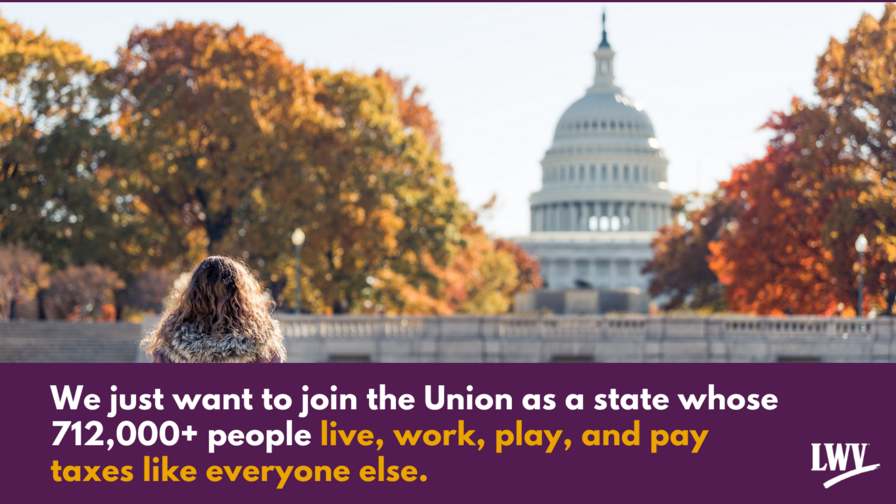 We Must Grant Statehood for the People of D.C.

This blog was written by Anne Anderson, Chair of the LWVDC Committee for Full Rights for DC Citizens

As I write this article, we’ve just seen the House Oversight Committee reject the amendments offered by those in opposition to the Washington, D.C. Admission Act (H.R. 51) and vote it out of committee and to the House floor. This is only the third time in the history of the United States that a DC Statehood bill will reach the House, so those of us who’ve worked to make our community a state have mixed feelings. We’re elated that we've come so far after many, many years of work, but also aware of the obstacles that lie ahead.

My personal experience living in DC illustrates why statehood is necessary for expanding our democracy.  When I moved to DC in 1964, we were still ruled by a 3-member Board of Commissioners. DC citizens had no vote in “their” government, but that fall, for the first time since 1801, they given the ability to vote for President because of the passage of the 23rd Amendment. Over the next decade, the civil rights movement helped bring a more representative government at the local level with an elected school board, a non-voting Congressional delegate, and a limited Home Rule government. Each of these were important steps towards full democracy in DC.

Several institutions needed to be developed as the people of DC sorted out how to govern themselves successfully, not having done so for nearly 200 years. A large segment of our population is made up of multi-generational District residents — in fact, our non-voting delegate, Congresswoman Eleanor Holmes Norton, often mentions her great-grandfather walking off a plantation in Virginia as a fugitive slave to come to DC. Her family has been here ever since. This illustrates that while DC is said to have a highly transient population, we also have a solid community who has been here for a long time, with a significant emotional and financial investments in the city.

A major obstacle to the development of our local democracy is the fact that Congress has kept total control of DC’s laws and budget. We can work hard to get a bill passed through our Council and signed by our mayor, but Congress can decide (and often does) that they don’t like it, only for the bill to disappear. I have several friends who’ve moved to DC and been shocked to discover how thoroughly disenfranchised we are. I know from visiting many of our sister Leagues to talk about statehood how horrified people feel when they begin to understand what it’s like to lack both full representation in Congress or local control over our laws and budget.

On January 6th, our mayor had to wait for Department of Defense authorization to deploy the National Guard to come to the aid of the Capitol Police. Had D.C. been a state, this obstacle wouldn‘t have stood in the way of protecting the Capitol and saving lives.

The consequences are serious. Many examples of how Congressional control has harmed DC residents come to mind. For several years, DC was prohibited from having a needle exchange program and ended up with the highest HIV/AIDs infection rate in the country. More recently, peaceful protesters in Lafayette Square were violently attacked by law enforcement at the direction of the former president, which our mayor could do nothing about. On January 6th, our mayor had to wait for Department of Defense authorization to deploy the National Guard to come to the aid of the Capitol Police. Had D.C. been a state, this obstacle wouldn‘t have stood in the way of protecting the Capitol and saving lives.

You can see why, in 1971, when the idea to shrink the federal district and admit the rest of the territory as a new state was developed, it made sense to me. We could remove the barrier of Congressional control and join the rest of the states as equals. We could gain full voting representation in the House and senators to vote for us on important national issues. The Washington, D.C. Advancement Act, which would make DC a state, is similar to the idea developed in 1971. Visit LWVDC’s statehood page for videos and background papers that supply more information.

Even though DC residents got the right to vote for President and were granted limited Home Rule, we still aren’t full citizens. We want no special status, no special treatment. We just want to join the Union as a state whose 712,000+ people live, work, play, and pay taxes like everyone else. We’re tired of taxation without representation, of having to figure out how to manage our local laws and budget without running into the whims of one congressperson or another.

This week, we look forward to this legislation passing the House. We at DC Vote will be holding a Watch Party for the House floor vote on April 22nd — all are welcome to join us.

Redistricting Watch: I Fight For Fair Maps Because I Care About D.C. Statehood

The League joined coalition partners calling for passage of H.R.51, the Washington DC Admission Act. This legislation passed the U.S. House on June 26, 2020.