What issues are you willing to defend? For me, it’s Equal Rights

This guest post was contributed by Sherry Macqueen of the LWV of North Carolina ERA League Action Team.

Do you remember how you felt in the weeks after the 2016 elections? Most of us took to the streets joining Women’s Marches from coast to coast. Why? Because we were afraid that all our good work related to equality and justice for women was in jeopardy.

What issues are you willing to defend?

Is it access to affordable health care including birth control? Is it reproductive freedom? Gender equality? Racial justice? Is it equal pay for equal work? What about protections for pregnant women in the workplace? Safety from harassment on the job or from a family member at home? Are you worried that Title VII and Title IX will be defunded or destroyed? 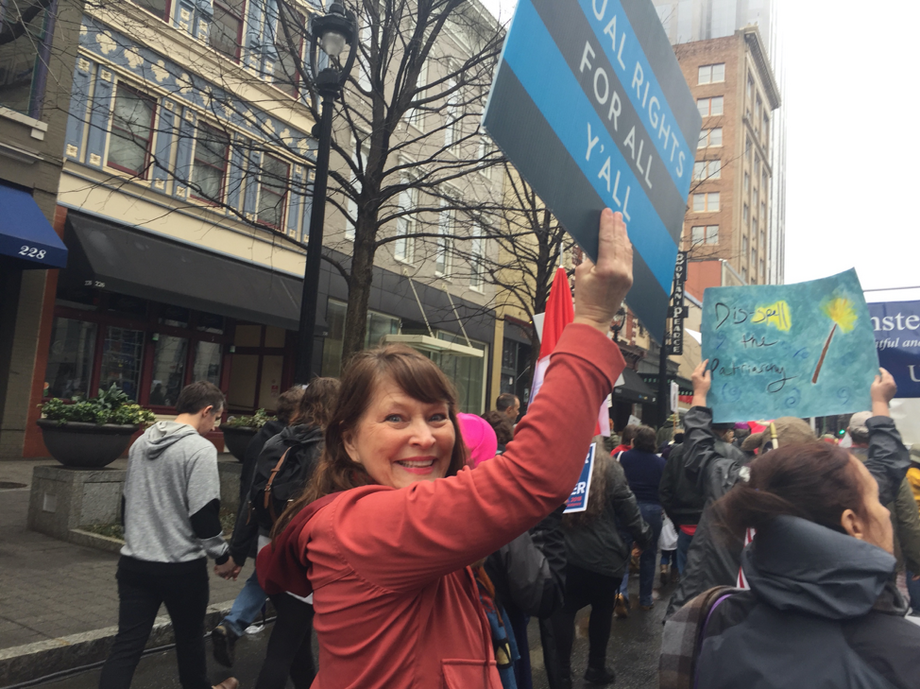 I live in North Carolina, an unratified state. I am a member of the LWV of North Carolina and co-chair, along with Judy Lotas, our state ERA action team. In early spring of 2020, the LWVNC received a grant from LWVUS in order to support our efforts engaging lawmakers in an effort to ensure equal rights for all, regardless of sex. The grant provided funds to educate North Carolinians on the Equal Rights Amendment.

Now that Virginia has become the 38th, and final, state required to ratify the amendment, there is increased interest and urgency in pressuring Congress to remove the deadline for ratification. LWVUS and state Leagues are joining forces in an advocacy and lobbying campaign aimed at passing Senate Joint Resolution 6 which would remove the ERA deadline. The House already passed a related resolution, House Joint Resolution 79, in February of this year.

Our Outreach for Equal Rights

Our state team of seven members was excited to think creatively in spending the grant funds. Team member, Sheila Denn, oversaw the printing of the League postcards and fine-tuned our mailing list.

We launched a Dads for Equality postcard campaign, mailing five thousand postcards to North Carolina residents, who had voted in recent elections, asking them to contact our US senators, Richard Burr and Thom Tillis, to request support for S.J.Res.6. An additional 1,000 cards were printed to distribute to friends, family, and neighbors. We reached out to other like-minded organizations, including AAUW, ERA-NC Alliance, and Business and Professional Women/NC, and allowed them to use their own branding to make the postcards available to their members either electronically on social media or as printed postcards. 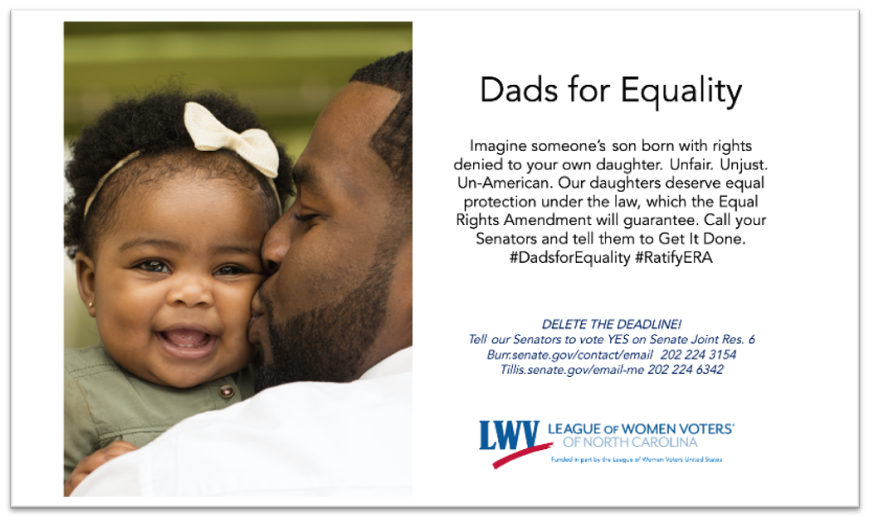 My dad told me I deserve the same rights as your son - the same salary for doing the same job, the same standing under the Constitution. That can only happen if the Equal Rights Amendment becomes law. #DadsForEquality @lwvcm pic.twitter.com/tT83naLwVk

We've reached out to North Carolina’s U.S. Senators, Thom Tillis and Richard Burr, to request meetings to talk with them about the ERA and, in both cases, we were granted virtual meetings with their legislative staff.

We and members of ERA-NC Alliance, Ratify ERA NC, and staff from Winston & Strawn LLP presented a history of the ERA, its current status, and how the amendment would affect our military, reproductive freedom, and equal pay for equal work. We asked that the senators support Senate Joint Resolution 6 when it comes before the Senate. Both experiences were very positive. We felt empowered and shared what we had learned with ERA action teams in other unratified states, including South Carolina and Georgia.

So what issues are you willing to defend? We all have at least one issue that we hold dear.

LWV Stands with Jewish and Muslim Communities Against Hate
Press Release / May 26, 2021
On Women’s Equality Day, We Continue the Fight

Blog / August 26, 2020
Sexual Orientation & Gender Identity: The Supreme Court weighs in on the fight against discrimination

The Supreme Court  rules that sexual orientation and gender identity are included in Title VII's prohibition of discrimination on the basis of sex.